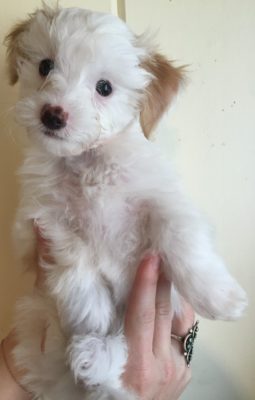 One of the abandoned puppies up for adoption.

ENCINITAS–Four out of seven puppies found in a box in an alley two months ago were adopted this week at the Rancho Coastal Humane Society. The other two puppies have pending applications.

Once all puppies are adopted the humane society will schedule surgery to repair the floating kneecap on the mother dog named, Polly. One of the puppies was born with an improperly formed eye that has been removed.

The dogs were rescued by someone who heard noise coming from the abandoned box in an alley. He took the dogs to the Department of Animal Services which transferred mom and her litter to Rancho Coastal Humane Society through their FOCAS program.

“We had a few dozen people come out to meet them. In fact, they were standing in line when we opened for business,” said Rancho Coastal Humane Society spokesman John Van Zante. “The other two have pending applications. That means that the applications are good, but we’re waiting on another family member or pet to meet the pups before giving final approval.”

The humane society is accepting donations to help cover the medical costs for Polly and her puppies. It could run about $3,000.