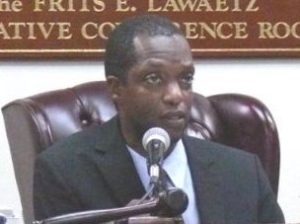 Wayne A.G. James, 56, of St. Croix, U.S. Virgin Islands, was convicted of two counts of wire fraud and one count of theft of federal program funds.  Sentencing has been set for Dec. 20.

“Wayne James abused his trusted position as a senator for the people of the U.S. Virgin Islands by stealing tens of thousands of taxpayer dollars to pay his own campaign and personal expenses,” said Assistant Attorney General Brian Benczkowski. “Public corruption undermines confidence in our government institutions and the rule of law. Wayne James’s conviction is a testament to the commitment of the Criminal Division and our law enforcement partners to hold accountable those who breach the public’s trust for their personal gain.”

James was indicted in October 2015. From January 2009 through January 2011, James served as a senator for the U.S. Virgin Islands. According to the evidence admitted at trial, in or about April 2009, James began submitting requests to the Legislature of the U.S. Virgin Islands for funds, ostensibly to pay for research, copying, and translation of historical documents housed at the Danish National Archives related to the Fireburn, a revolt against slave labor that took place in the Virgin Islands in the 1800s.

Though James initially did use some of the requested funds to pay for the research project, he soon began to take money for himself. By 2010, James fabricated entire invoices and simply stole the money. James caused the Legislature of the Virgin Islands to pay him over $90,000, approximately $70,000 of which he took for himself. James used the misappropriated government funds to pay his re-election campaign expenses and other personal expenses after his legislative salary was garnished from a tax levy of more than $197,000.

“The U.S. Attorney’s Office for the U.S. Virgin Islands is committed to rooting out fraud and corruption in our government,” said U.S. Attorney Gretchen Shappert. “The defendant’s betrayal of the people and his elected office is intolerable and we will continue to pursue such abuses of the public trust. Here, the defendant exploited a precious piece of Virgin Islands history for his own purposes. And a Virgin Islands jury held him accountable. ”

The FBI and the Office of the Virgin Islands Inspector General investigated this case.