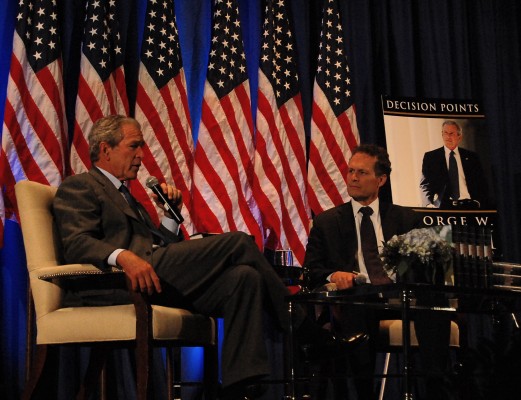 The former president spoke to members and other invited guests of the San Diego Regional Chamber of Commerce at the Presidential Ballroom at the U.S. Grant Hotel.

The Q and A hour-long program was led by Ruben Barrales, CEO and president of the San Diego Regional Chamber of Commerce.

Bush explained to the group why he stayed out of the public limelight for two years. 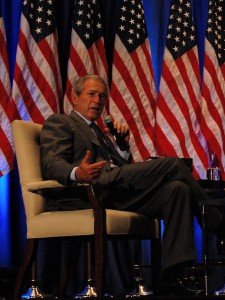 Bush talked about his eight years in office, the tough decisions he made, including the decision to go to war in Iraq and Hurricane Katrina, and his life after his presidency.

Bush said jokingly, “The fact that I wrote a book may come as a shock to some.”

He says he wrote the book to give readers a sense of what life was like during his eight years in office.

“I had a lot of controversial decisions. I fully understand that. I just want to put the reader in my place,” said Bush. “I don’t expect to change a lot of minds. I’m not trying to change minds. I’m just trying to be part of the accurate portrayal of history.”

Bush recalled that tragic day, Sept. 11, 2001, when he first got the news of planes hitting the World Trade Center in New York City. He was sitting in a Florida classroom full of elementary students when staffers whispered the devastating news into his ear.

“I had been told by Karl Rove heading into the classroom that a plane hit the World Trade Center,” he said. At first, Bush had thought the incident was an accident, but he learned through another staffer that a second plane had hit the second tower.

“My first reaction was anger, who dared attack our great country and was looking at the children, the child particularly who was reading at the time, and the innocence of that child contrasted starkly with the evil of the killers,” he recalled.

Bush said his reason and decision to go to war in Iraq and Afghanistan are detailed in his book.

Bush is currently on a speaking tour coinciding with the release of his book.