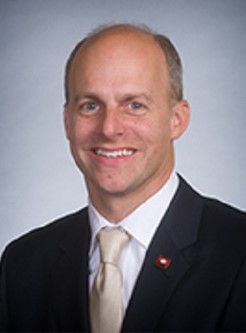 Files, 46, of Fort Smith, Arkansas who represented Arkansas’s state legislative district No. 8 in the Arkansas State Senate until his resignation in January 2018 following his guilty plea in this matter, was sentenced by Chief U.S. District Court Judge P. K. Holmes III of the Western District of Arkansas.  Judge Holmes ordered Files to serve three years of supervised release following his prison sentence as well as pay restitution in the amount of $83,903.77.  Files was ordered to surrender to the U.S. Marshals Service to begin serving his sentence on Aug. 2.

Files pleaded guilty to wire fraud, money laundering, and bank fraud on Jan. 29.  According to admissions made in connection with his guilty plea, between August 2016 and December 2016, while serving in the Arkansas State Senate, Files used his senate office to obtain government money known as General Improvement Funds (GIF) through fraudulent means and for personal gain.  Specifically, Files authorized and directed the Western Arkansas Economic Development District, which was responsible for administrating the GIF in Files’s legislative district, to award a total of $46,500 in GIF money to the City of Fort Smith. To secure the release of the GIF money, Files prepared and submitted three fraudulent bids to the Western Arkansas Economic Development District. Files then instructed an associate to open a bank account under that person’s name to conceal his role as the ultimate beneficiary of the GIF award. When a first installment of approximately $25,900 was wire transferred from the City of Fort Smith to the associate’s bank account, the associate withdrew approximately $11,900 of the funds in a cashier’s check made payable to FFH Construction, Files’s construction company, and the rest in cash.  The associate then hand-delivered the check and the cash to Files who, in turn, deposited the check into his personal bank account.