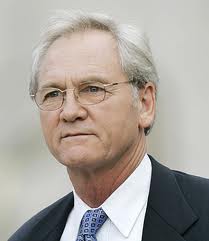 At a hearing Friday in Montgomery, Ala., in addition to the prison term, U.S. District Judge Mark Fuller ordered Siegelman to serve three years of supervised release and to pay a $50,000 fine.  Siegelman was originally convicted by a federal jury in June 2006 of seven counts of an indictment, involving bribery, conspiracy to commit honest services mail fraud, honest services mail fraud and obstruction of justice.

In June 2007, Siegelman began serving a prison term on those convictions, but was released on bond in March 2008, pending an appeal in which two honest services mail fraud counts were reversed. All of the five remaining counts were upheld in two opinions of the Eleventh Circuit Court of Appeals, and the U.S. Supreme Court denied further appellate review.  The district court reviewed and denied all of Siegelman’s various claims for a new trial prior to his re-sentencing Friday.

Siegelman stands convicted of bribery, conspiracy and honest services mail fraud arising from a scheme in which Scrushy paid $500,000 to control a seat on the state regulatory board governing HealthSouth.  Siegelman further stands convicted of obstruction of justice arising from a federal investigation of an alleged pay-to-play scheme with Alabama businessman Clayton “Lanny” Young.

“Today’s sentence is another welcomed step toward closure to a dark chapter in Alabama politics.  Six years after the trial jury rendered its verdict, and the appellate courts reviewed the evidence, former Governor Don Siegelman remains convicted for the serious felonious crimes he committed while serving as governor of Alabama.  The verdict, the appellate review and the sentence have energized my faith in our legal system and renewed my commitment to prosecute politicians who commit bribery, honest services mail fraud, conspiracy and obstruction of justice. I am very proud of the courage displayed by everyone who assisted in the prosecution of this very significant and important case,” said Acting U.S. Attorney Franklin.