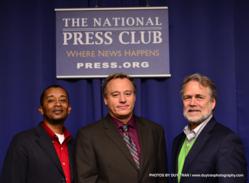 Arlington, VA– (PRWeb)–On Wednesday night, members of the National Press Club gathered for a screening of “Countdown to May Day” a sports documentary written, produced and directed by Leigh Simons.

The show is a stunning and often emotional portrayal of the main event and co-main event fighters, following them as they train and interact with their families, trainers and supporters. It features many of the nation’s most prominent sports writers in interviews sharing their insight into each matchup. Viewers get a rare glimpse into the psyche of the fighters—their personalities and their motivations for success on May 4th.

In attendance at the screening was Mark “Too Sharp” Johnson, a recent International Boxing Hall of Fame inductee, and the first African-American to win a World Flyweight title. Said Johnson, “The documentary was an insight into all the fighters…not just the main event fighters, and not the way you’re used to seeing fighters in documentaries before matches, mugging for the cameras, talking a big game, etc. You get to see them in quieter, more reflective moments and take a walk through their everyday lives, and that makes for a great story.”

“The idea of profiling the undercard fighters is revolutionary when it comes to selling pay-per-view events,” said Andre M. Johnson, representative for DC-native and World Champion Lamont Peterson and Director of Public Relations with Headbangers Promotions, Inc. “Previously, the focus had always been solely on the main event fighters, but when people are paying for a fight today, they want to know about the others on the card.”

Said Simons, “For the last 10 years working with Golden Boy Promotions, the focus has always been to create and promote a pay-per-view card with depth and excitement, and a co-main event worthy of its own pay-per-view. This is the standard that founder Oscar de la Hoya and CEO Richard Schaefer established the moment they started producing pay-per-view events. This ‘May Day’ co-main event of Abner Mares vs. Daniel Ponce de Leon is a gift to the fans.”

The documentary marks the debut of a new strategic production relationship between DC area-based Henninger Media Services and Leigh Simons Productions. The creative partnership has brought the biggest names in the sport of boxing to the Washington, D.C. production scene. “We wanted to take our execution to the next level, and with Henninger Media Services’ extensive experience across a wide variety of network programming and filmmaking platforms, we felt they were the right strategic provider at the right time with whom to move forward. They exceeded our expectations in all facets of post production,” said Simons.

After the screening, filmmaker Simons discussed the project and shared with the audience some behind-the-scenes stories surrounding the upcoming May 4th pay-per-view event. He also touched on his experiences working with prize fighters over the course of his directing career. Simons has directed 23 boxing documentaries over the past decade.

Both Leigh Simons and Rob Henninger, Founder and CEO of Henninger Media Services, are eager to see the partnership spawn new projects across a wide variety of filmmaking genres. “Their organization and their team are very talented and diverse. Our goal is to work with them to develop pioneering TV series, documentaries and feature films right here in Washington, D.C. We want to take full advantage of their depth of experience and talent, as well as the talent-rich DC production environment,” said Simons. Added Henninger, “We are thrilled about the opportunity to work on new programming with one of the best in the business.”

In only a two-week time frame, working with Henninger, Simons was able to draw on the resources of four editors working collaboratively in four different rooms at the same time, with over 12TB of shared footage. Graphic design, advanced color correction and a dynamic audio track were also featured elements of the final product.

“Countdown to May Day” is currently airing throughout the country on all regional Fox Sports network channels and is available through multiple pay-per-view providers nationwide. The film is also available in full at the Golden Boy Promotions YouTube channel. “May Day” airs live on pay-per-view from the MGM grand, Saturday May 4th.