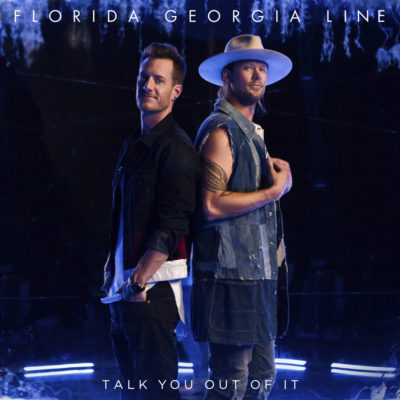 Nashville, TN–Florida Georgia Line is coming in hot with a sensual new single, “Talk You Out of It,” available now across all major online retailers and is set to impact Country radio on November 5.

“‘Talk You Out of It’ has a very different feel for us … It’s the baby-making song on the album,” laughs Tyler Hubbard. “But really, BK and I are always challenging ourselves creatively and knew that we had to record it when we first heard it.”

FGL’s Brian Kelley agrees, “The vibe was just so money. Nothing like a good date night in.”

FGL continues to burn up the charts and just last week topped both Billboard and Country Aircheck/Mediabase Country Airplay with “Simple” (16th #1 overall as artists). The back-to-basics lead single has clearly struck a chord, recently being certified platinum while also claiming another RIAA landmark as their 2013 game-changer “This Is How We Roll” is now 5X Platinum.

Florida Georgia Line Live From Las Vegas, their five-nights-only residency inside Zappos Theater at Planet Hollywood Resort and Casino, takes over Sin City in December, with openers Canaan Smith and Mason Ramsey getting the anything-goes party started each night. Guests can anticipate fresh tracks from FGL’s forthcoming album, including already-released “Colorado” and “Sittin’ Pretty,” plus their career-defining smashes. Additional details and ticket information is available here.