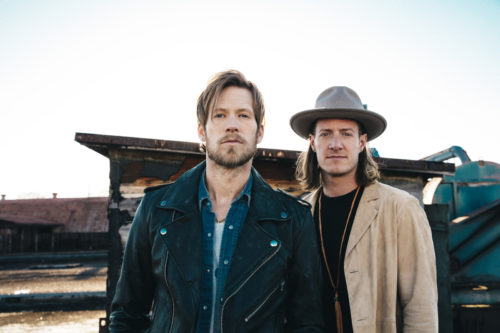 Still reeling from the excitement of “Confession” topping both Country radio airplay charts, history-making RIAA DIAMOND-certified country duo Florida Georgia Line released the first single, “H.O.L.Y.,” off their third studio album from Big Machine Label Group. Due out this summer, Dig Your Roots will depict an evolution in both their musical and personal journeys.

The track was written by hit makers busbee, Nate Cyphert, and William Larsen, and produced by the award-winning Joey Moi. Moi has been at the helm for Florida Georgia Line’s entire discography to date including their 2X PLATNIUM debut “Here’s to the Good Times,” the highest grossing country debut of 2012.

Brian Kelley says of the single, “We really put in the time making sure this song was the strongest it could be and we’re pushing ourselves on all levels: vocally, lyrically, melodically,” he continues, “I promise the fans, the wait was worth it.” Tyler Hubbard adds, “As we continue to grow and mature in our lives, we really wanted our music to start reflecting those changes. H.O.L.Y. definitely lets the fans see a deeper side to us and we’re excited about this next chapter.”

The lead single’s music video, premiered April 29 on VEVO in advance of wide release April 30, was shot on location at The Twelve Apostles, just outside of Melbourne, Australia. The stripped down Cliffside scenes and sweeping vistas of a 25,000 year dormant volcano, matched with lyrics of love’s salvation, culminate in an astounding visual as an ode to their wives. Both Brittney Cole Kelley and Hayley Hubbard show their support, appearing in the video and marking their second time on set with their husbands.

The group is also on the road this year for their Dig Your Roots tour which kicked off its first dates this past March and continues through October. Joining the guys are Kane Brown, The Cadillac Three, and Cole Swindell. The tour is sponsored by Budweiser, a brand with a strong commitment to country music.

For up to date information on Florida Georgia Line, the tour and tickets go to www.floridageorgialine.com  or www.livenation.com