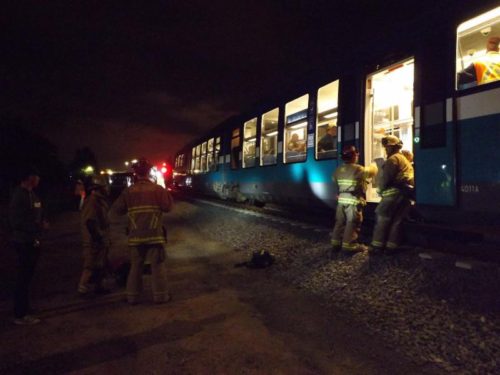 “The goal of this simulation was to measure NCTD’s and other agencies’ Standard Operating Procedures during a major emergency situation,” said Tim Cutler, Director of the Operations Control Center at NCTD.

“As different agencies, we came together last night and were able to see how we worked together in an emergency situation and see where we could improve. That’s really what this is all about—continuous improvement, going from good to better,” said Cutler.

In preparation for the exercise, NCTD and other agencies began meeting months in advance. These meetings brought together different agencies to plan for and ensure that the simulation was executed properly and safely.

To help make the simulation even more realistic, the San Marcos Fire Department—who coordinated the first responders—chose to not inform the fire teams ahead of time about the event but instead coordinated with the various chiefs to ensure that each department had sufficient coverage for actual emergencies. They also arranged to bring volunteers from the emergency medical technician program at Palomar College who had wound makeup and played the part of victims.

NCTD also included volunteers who had disabilities as victims in the emergency exercise. This addition allowed first responders to consider how they would address various situations in an emergency unique to rail and bus operations.

The simulation was part of an ongoing effort to conduct emergency simulations throughout the NCTD system. Each scenario presents a complex set of challenges to NCTD staff, contractors, and first responders, where they can test their emergency plans and procedures.