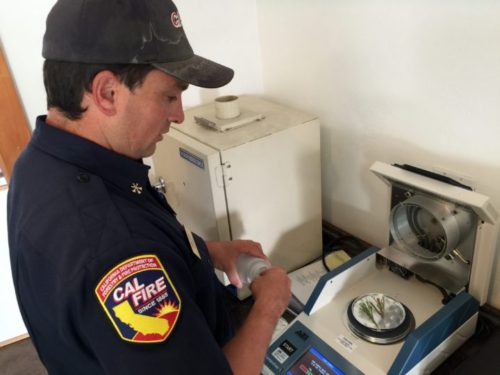 SAN DIEGO–San Diego County area fire chiefs are preparing for a potentially dangerous peak fire season due to historically dry fuel conditions. Residents are reminded to take all precautions and be ready to evacuate if needed.

The storm system that dropped at most 1.7 inches of rain in the mountains Friday evening through Saturday was not significant enough to lower the fire risk. The region is starting off the week with elevated fire risk and Santa Ana winds with a red flag warning in effect through Tuesday evening.

Firefighters determine the severity of a fire season in large part by measuring “live fuel moisture” levels. Firefighters collect samples from specific native live plants and put them in a machine which then calculates the percentage of the moisture it contains.

“Anytime we get below 100 percent, a fire will burn and will carry in the live fuels. When we get below 60 percent we consider that critical fire behavior,” said County Fire and CAL FIRE San Diego Unit Chief Tony Mecham. “We’re at 43 percent. We’re at the lowest recorded live fuel moistures that we’ve ever been, and we’ve been keeping these type of fuel statistics for over 100 years, so we’re 17 percent below critical.

“What that means is we don’t need a 50 mile-per-hour wind to carry a fire. If we get a spark and something ignites, just because the fuels are so dry, we’re going to burn. It’s scary and we are headed into the Santa Ana season. If, and I don’t think it’s a matter of if but when, we get a Santa Ana wind event, we are going to have significant fires,” Mecham said.

To put it further in perspective, San Diego County has recently come off a multiyear drought. In 2016, the region got a little more rain than average, but not nearly enough for any plant recovery. Then last year the region was below average again and we are on track to enter another drought cycle again, Mecham said.

Statistics as of Oct. 14 say it all: statewide, there have already been 5,322 fires, while there were 5,408 fires in 2017 year to date. In the past few years CAL FIRE San Diego has fought between 220-250 fires, and this year, they have battled 415 fires to date, which is before the peak fire season when we experience Santa Ana winds.

“Every year, we just keep having these record-setting fire seasons, it doesn’t seem to slow down,” he said. ”And, we still have four months to go. Typically, we start thinking of fire season winding down in November, maybe first part of December, but we were still at our top-level peak staffing into January last year, so I think we’re all expecting to be in this through New Year’s and then fingers crossed we get a little bit of rain.”

Mecham said it is not just his concern, but it is one shared by all the fire chiefs in the County. They have collectively discussed a regional approach and making extra resources available including staffing during the expected wind events.

For County Fire and CAL FIRE San Diego, that translates to additional augmentation from the state of California. With that they’ve been able to hire 40 additional firefighters for San Diego County. They have also entered into a partnership with San Diego Gas & Electric to dispatch and manage SDG&E’s heavy lift helicopter. This means it is available for use earlier in the year.

Normally they have only had it in the three fall months this year, but this year they have had it available since May.

Mecham said they have been able to use it on more fires this year as a result and that has kept those fires relatively small due to the powerful firefighting punch it delivers. The chief noted that in the two recent San Pasqual Valley fires, a CAL FIRE air tanker was in the county and they used it to ensure the fire stayed manageable.

Despite all this, the fire chief warned people not to rely solely on firefighters’ efforts because if there are 60-70 mph winds on a fire, even having 400 fire engines on it won’t be enough. Instead people need to realize they are part of the solution in the form of emergency preparedness.

To protect their home during a fire, the single most important thing people can do is to create defensible space around their home; 100 feet is recommended. That clearance work involving any mower or power equipment can be done only during non-critical fire conditions because it can actually spark a fire in certain situations.

Firefighters will not stay to defend a home from an oncoming fire, if a homeowner has not taken the time to do the necessary clearance around a home, Mecham said. He added that this was only if no one was believed to be in the home in need of rescue.

Beyond defensible space, families need to have an emergency plan.

“It’s really three simple things and that’s Ready, Set, Go, and the ready is doing your defensible space, making sure your address is marked, having an evacuation plan, talking to your family about what items we are going to take: medications, family heirlooms, photos. Because when there’s smoke in the skies, it’s not the time to decide what you’re taking or what car you’re taking to fit your animals,” said Mecham.

“The second part is we need people to get set. When we get into the Santa Ana conditions, when we see smoke, if we issue an evacuation warning, you need to implement your plan. You need to start loading your car, you need to start getting ready to go and ultimately when we issue the evacuation order, that’s the go part,” he said.

Residents are reminded that if a they feel unsafe, they do not need to wait for an official warning or order to evacuate.

County Fire and CAL FIRE San Diego work in partnership with the Office of Emergency Services to help people prepare for disasters such as wildfires. Visit ReadySanDiego.org to learn about how to prepare in advance of a wildfire and what to do during and after.

Residents are encouraged to register their cell phones on AlertSanDiego, the County’s emergency notification system and download the SD Emergency App at no cost. An emergency family plan template is available in English, Spanish, Tagalog, Vietnamese, Japanese and Chinese.