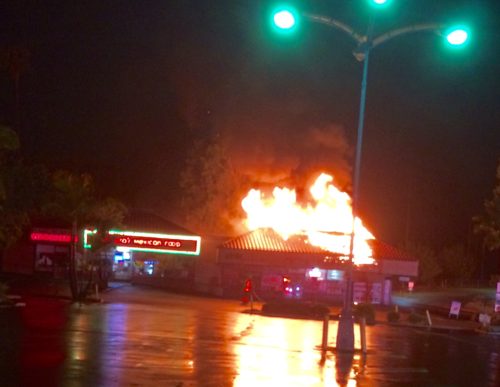 Heartland Fire and Rescue crews from La Mesa, El Cajon and San Diego Fire were dispatched just after 11 p.m. to the structure fire in the 6000 block of Lake Murray Blvd. Fire crews arrived within five minutes to discover a single story liquor store with fire coming through the roof.

A second alarm was quickly called bringing additional fire engines and firefighters. The blaze was fought from the exterior due to the heavy fire conditions upon arrival. The fire was extinguished in 20 minutes with fire crews remaining on scene throughout the night. The fire was contained to the building of origin with minor damage to the adjacent structures.

One firefighter suffered a minor medical injury and was transported to Grossmont Hospital to be evaluated. The cause of the fire is currently under investigation.