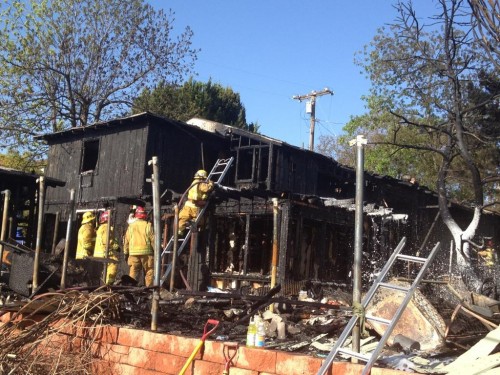 A second alarm fire destroyed one home and damaged another in La Mesa.  Photo: courtesy of Heartland Fire and Rescue.

LA MESA—Three adults were displaced after a residential structure fire Friday afternoon destroyed their home in the 9100 block of Dillon Drive in La Mesa.

Heartland Fire and Rescue crews from La Mesa, Lemon Grove and El Cajon, as well as units from Santee, San Diego and Cal Fire responded to the scene.

As a result of a westerly wind the fire spread to nearby trees and vegetation, and the roof of a nearby home also caught fire, so a second alarm was quickly issued. Firefighters had the fire fully contained in about one hour.

Fire investigators said a home next to the structure fire did sustain some roof damage.

The American Red Cross was called to assist the residents.

There were no injuries reported. The cause of the fire is currently under investigation.