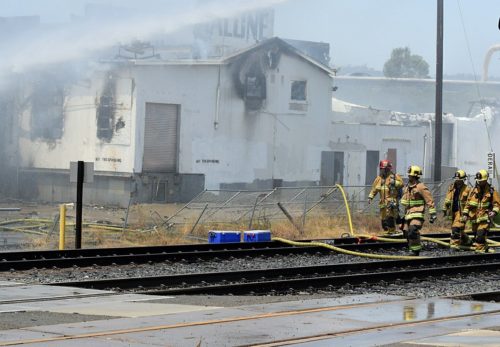 Escondido Fire Department dispatchers received a call at 8:53 a.m. of a structure fire in the 500 block of North Hale Avenue.

When firefighters arrived at the location flames were shooting through the building’s roof prompting fire officials to close several nearby streets, and halt Sprinter service at Nordahl Road Station and Escondido Transit Center.

The smoke from the fire spread to northbound and southbound Interstate 15 freeway lanes causing traffic congestion.

Fire officials say the intensity of the blaze made it impossible for firefighters to enter the 10,000 square-foot structure. Crews fought the blaze with hoses filled with water while standing atop of fire truck ladders. The fire was fully contained later in the afternoon.

According to Escondido Fire Chief Russ Knowles, there were reports of transients inside the structure. Knowles could not confirm whether the two missing transients escaped the blaze.

When it’s safe to enter, authorities will locate any potential victims, and launch an investigation of the fire.