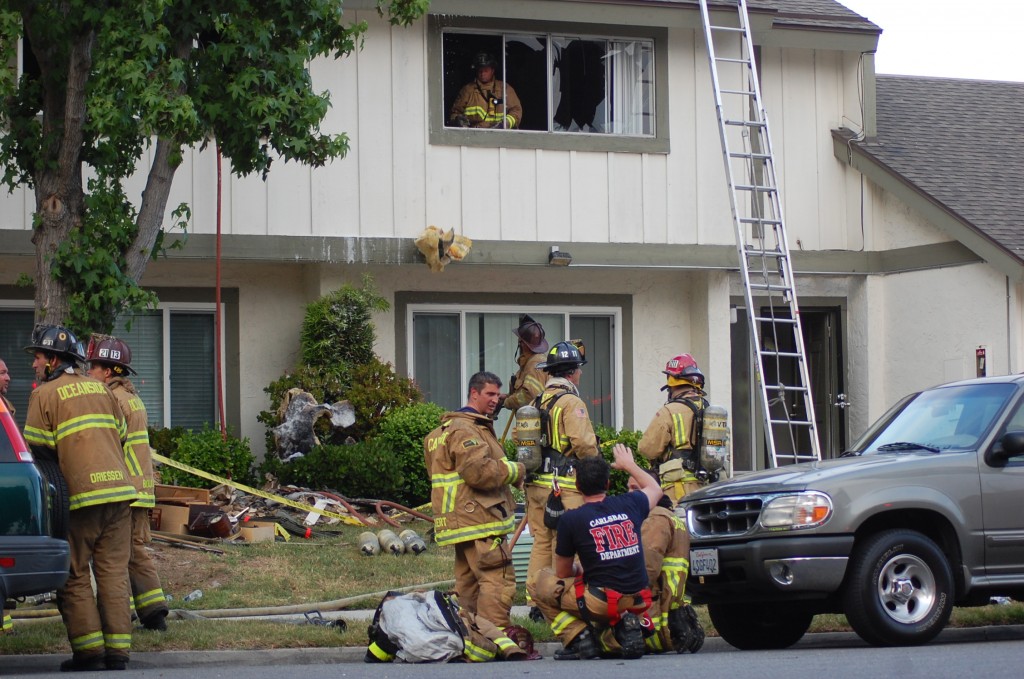 Firefighters from Oceanside, Carlsbad, and Vista Fire Departments at the scene of an Oceanside condominium fire. Photo: Gina Yarbrough

Fire officials say a neighbor in a condominium reported that the condo, located in the 400 Block of Los Arbolitos Blvd., was on fire. Oceanside, Carlsbad, and Vista Fire Departments were dispatched to the scene.

Firefighters successfully extinguished the blaze within an hour.

Bridgitte McHenry and her family were home when flames erupted from one of the units. “I was in the garage when one of my kids said something was burning,” she said. McHenry said she didn’t see any flames until 10 to 15 minutes later. Her mother, grandmother and three children fled from their home.

The fire loss is estimated at $400,000 for the structure and $50,000 for contents. No civilian or firefighter injuries occurred.

Officials say an unlicensed, uninsured, plumber which had been hired by one of the unit’s resident to repair a leaking copper pipe, had caused the fire. The fire started in a wall while the plumber was using a torch to solder a repair.

“This was a very expensive fire caused by a failed attempt to effect a very cheap repair,” stated Oceanside Fire Battalion Chief Rob Dunham, who was the Incident Commander on the fire.

The fire is considered accidental, and no charges will be filed.

The American Red Cross was on scene to provide clothing and temporary shelter for the displaced residents.