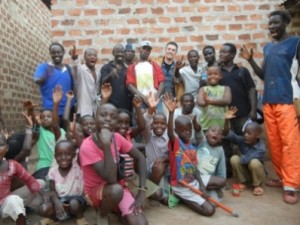 NEW YORK–There are thousands of films produced all over the world each year—many without the luxury of a Hollywood studio for support. Amongst the most hard-pressed of filmmakers are those working within third-world countries.

Isaac Godfrey Geoffrey (I.G.G.) Nabwana is a loving father who produces, directs, and edits action movies from his home in the slums of Wakaliga, Uganda. Funny, touching, and inspiring, “Wakaliwood: The Documentary” celebrates the pure joy of creativity and the power held by a community when united by a common dream.

There are few resources for filmmakers in Uganda. Out of necessity, I.G.G. Nabwana founded Wakaliwood, a community of actors, filmmakers, and technicians dedicated to building an independent film industry. The term “Wakaliwood” is a combination of Hollywood and Wakaliga, the slum I.G.G. calls home.

As in the early days of Hollywood, Wakaliwood must build all the equipment and rely on their ingenuity and available materials. For example, the guns they use as props are either carved from wood or welded from car parts and scrap metal. Their tripod is a modified car jack. The computer used for editing, sound mixing, and special effects is built by I.G.G. Nabwana himself and constantly overheats in the Ugandan climate.

Everyone in Wakaliwood works multiple jobs to earn a living, but distribution is the main source of revenue. Cast and crew keep a share of the DVDs they sell at street corners and the local markets. Complicating matters is the fact that Wakaliwood has roughly six days after each new film to make their money, as by that time the film has been pirated and revenue plummets.

“We clicked immediately. We were like two excited kids sharing our favorite movies: Terminator, Predator, the Rambo films.” Hofmanis explained. “Before I knew it I was adopted by the Nkima (Monkey) clan and became the first muzungu (Westerner) to appear in Ugandan cinema.” Hofmanis co-stars in I.G.G. Nabwana’s latest action film, Black, in post-production.

Upon returning to the United States, filmmaker Ben Barenholtz quickly came on board the documentary project. “I jumped at the chance,” Barenholtz confesses. “Uganda is a place that I never anticipated making a documentary, but Isaac’s story inspired me on many levels.”

Within weeks, the two filmmakers, joined by cinematographer Andreas von Scheele, were on a flight to Uganda.

On August 20, a crowdfunding campaign via Kickstarter will be launched for “Wakaliwood: The Documentary.” The film and campaign will build awareness of the accomplishments of Ugandan filmmaker IGG Nabwana, as well as the joy, struggle, and passion shared by all the members of the Wakaliwood community.

About Alan Hofmanis Alan Hofmanis is the first American to visit and document Wakaliwood, a community of actors, filmmakers, and technicians producing Hollywood-inspired action movies in the slums of Wakaliga, Uganda. Adopted by the Nkima (Monkey) clan and given the Bugandan name Ssali, he is the international ambassador for Wakaliwood and Ramon Film Productions, the production company responsible for Uganda’s first action film, Who Killed Captain Alex? (2010) and its sequel Rescue Team (2011).  In 2012 he starred in the Ugandan action film Black and in the process became the first muzungu (Westerner) to appear in Ugandan cinema.