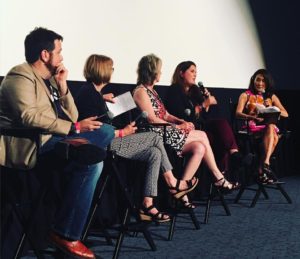 SAN DIEGO–ArcLight Cinemas and San Diego Filmmakers recently formed the San Diego Women’s Film Network, a new forum uniquely designed to support, educate and enrich women working in and those aspiring to work in the film, media, and entertainment fields.

The new joint venture kicked off July 19 at ArcLight Cinemas in La Jolla with a special evening of content specifically designed for industry women. Attendees heard valuable advice and insight from accomplished speakers in the film and entertainment industry discussing the high-priority issues facing women in the filmmaking industry today.

“It is important to discuss how the film industry is impacted by women filmmakers, especially in the San Diego region. The launch of this network is a golden opportunity for aspiring filmmakers to learn more about challenges faced by women in entertainment, and how women can collaborate within the industry to make cinematic history,” stated Gretchen McCourt, ArcLight’s Executive Vice President.