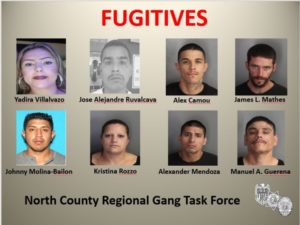 SAN DIEGO–Ten federal indictments unsealed today charge 55 defendants with crimes ranging from money laundering to heroin, methamphetamine and firearms trafficking in what officials have described as one of the most significant crackdowns in recent memory.

The defendants, including prominent drug dealers and documented gang members, were responsible for supplying a substantial portion of the heroin and methamphetamine distributed in North County.

Early Thursday morning, more than 150 members of the North County Regional Gang Task Force plus other law enforcement agencies made numerous arrests and during the course of the investigation searched more than 20 locations in Oceanside, Vista, elsewhere in North County and in Kingman, Arizona.

As of today at noon, 46 of the fifty-five defendants are either in federal or state custody. Fourteen were arrested this morning; the rest were arrested earlier in the week or were already in custody. Authorities are continuing to search for seven defendants; two are in Mexico. Many of the defendants are scheduled to be arraigned before U.S. Magistrate Judge Karen S. Crawford at 2:00 p.m. today and tomorrow.

According to charging documents, the defendants were involved in a variety of crimes, including drug distribution, firearms trafficking, robberies, vehicle thefts, burglaries and assaults.

In total, authorities seized heroin, methamphetamine and 25 firearms, including handguns, revolvers and assault rifles. These drugs and guns were being stored and sold in our North County neighborhoods, including across the street from Vista High School.

The charging documents describe a trafficking organization allegedly led by a Mexico-based woman who used dozens of street gang members to distribute heroin. Defendant Yadira “Pini” Villalvazo attended Vista High School and was an associate of Vista Home Boys street gang before she was deported following a federal drug trafficking conviction in 2002. According to charging documents, Villalvazo is now running her own Sinaloa Cartel-linked organization from Tijuana. Her specialty is still heroin.

According to court records, this drug trafficking organization supplied at least 25 percent of the heroin sold and consumed in North County and grossed tens of thousands of dollars in proceeds that were sent back to Mexico. The Villalvazo network distributed heroin in North County and also supplied pound quantities of heroin to a prolific distribution ring in Kingman, Arizona. 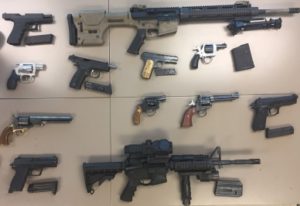 Heroin deaths in San Diego County more than doubled in the last decade, from 40 in 2005 to 90 in 2015. And this is despite the use of naloxone, which first responders have used to save countless lives. In 2015 alone, paramedics used naloxone 1,340 times. Heroin treatment admissions have risen every year in San Diego County since 2011.

Meth-related deaths increased more than 80% between 2011 and 2015. And about half of adults arrested in 2015 tested positive for meth at the time of their arrest.

“Today we’ve taken out one of North County’s largest heroin suppliers,” said Acting U.S. Attorney Alana Robinson. “This crackdown is our most significant response to date to the heroin epidemic ravaging our communities. We anticipate seeing a huge impact now that these defendants are removed from our community, particularly in the North County cities of Oceanside, Vista, San Marcos and other areas plagued by gangs.”

“The Sheriff’s Department is committed to working with our law enforcement partners to keep the influence of drugs and gangs away from our children and out of our community,” said San Diego County Sheriff Bill Gore.

FBI Special Agent in Charge Eric S. Birnbaum stated, “This investigation demonstrates the complex, international and multi-faceted nature of the gang threat in North County where heroin, methamphetamine and firearms related crimes threaten our communities. The FBI will continue to work tirelessly alongside our law enforcement partners at the North County Regional Gang Task Force to restore these neighborhoods to the good citizens who live in them.”

The case is also the result of the ongoing efforts by the Organized Crime Drug Enforcement Task Force (OCDETF) a partnership that brings together the combined expertise and unique abilities of federal, state and local law enforcement agencies.