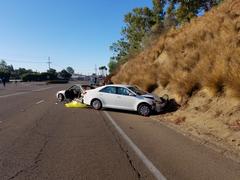 Traffic investigators say a 38-year old male was driving northbound on Centre City Parkway in a white 2014 Toyota Camry. A 33-year-old female driver in a gray 1995 Acura Integra attempted a left turn from the S. Escondido Boulevard connector to southbound Centre City Parkway and a collision occurred. Life saving measures were attempted on the female driver but were unsuccessful. The male driver of the Camry was not injured.