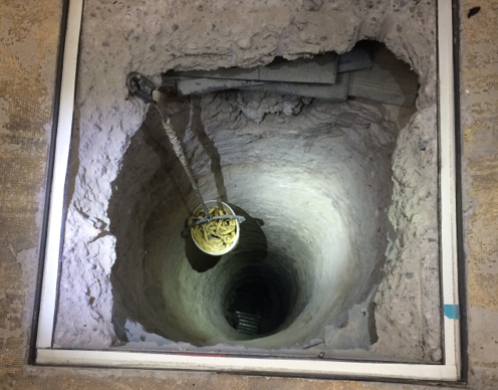 SAN DIEGO–Federal agents with the San Diego Tunnel Task Force and Mexican authorities Wednesday night shut down one of the longest and most sophisticated smuggling tunnels ever discovered along the U.S.-Mexico border, seizing 12 tons of marijuana and arresting 22 suspects.

The just completed tunnel extends the length of approximately eight footballs fields, from a warehouse in Tijuana to a building in San Diego’s Otay Mesa industrial park. The reinforced passageway features lighting, ventilation equipment and a rail cart transportation system.

“We see a super tunnel open for business once every year or so,” said U.S. Attorney Laura Duffy. “Just when they think they’re ready to move, we put it out of business. We continue to make good on our promise to relentlessly pursue and shutdown any tunnel as soon as it opens.”

Upon entering the Otay Mesa warehouse that concealed the tunnel’s U.S. entrance, investigators discovered a large room cluttered with boxes, tile and carpet remnants. From the entry point, the tunnel’s shaft plunged more than 30 feet, with no mechanism for ascending or descending into the corridor.

On the U.S. side, investigators recovered two tons of marijuana and made six arrests. Two of the defendants – Isaias Enriquez-Acosta, 53, of Tijuana, Mexico, and Isidro Silva-Acosta, 27, also of Tijuana – are being prosecuted by the U.S. Attorney’s Office for the Southern District of California. Both are charged in federal complaints with unlawful conspiracy to import a controlled substance and conspiracy to use border tunnels. The remaining four suspects, who were detained by the San Diego County Sheriff’s Office, face state charges.

In addition to the arrests in the U.S., authorities in Mexico detained 16 individuals and seized an additional 10 tons of marijuana.

The San Diego Tunnel Task Force began investigating suspicious activity at the Otay Mesa warehouse six months ago. Authorities made the decision to proceed with the takedown after determining the tunnel had been completed. Silva was taken into custody at the tunnel site, while Enriquez-Acosta was arrested at a nearby hotel.

Wednesday’s passageway is the 10th large-scale drug smuggling tunnel discovered in the San Diego area since 2006. In the last five years, federal authorities have detected more than 80 cross-border smuggling tunnels, most of them in California and Arizona.