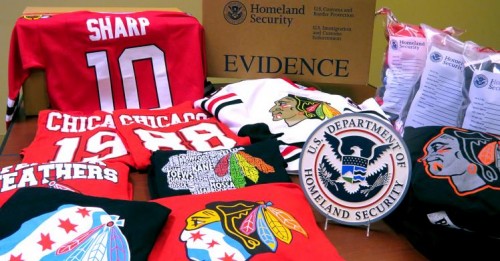 The enforcement initiative, dubbed Operation Team Player, resulted in the seizure of 4,376 items, including fake jerseys, hats, t-shirts, jackets and other souvenirs. The $181,215 value is based on the manufacturer’s suggested retail price of the counterfeit NHL merchandise.

These seizures were part of a crackdown on intellectual property rights (IPR) violators leading up to and during the 2015 Stanley Cup Final, as well as during the Blackhawks victory parade and celebration Thursday. Operation Team Player is an effort by the HSI-led IPR Center that targets counterfeit sports merchandise from all major U.S. sports leagues.

“During every major sporting event in this country, criminal groups capitalize on the enthusiasm of fans by selling them counterfeit team merchandise,” said James Gibbons, acting special agent in Charge for HSI Chicago. “Counterfeiting is not a victimless crime — it dupes the consumer, forces local stores out of business, and results in lost revenue for the trademark holders. Intellectual property theft is a very real crime with very real victims.”

Large sporting events such as the Stanley Cup Final are prime targets for counterfeiters, many of whom travel the country with the sole intention of scamming innocent sports fans. According to the International Anti-Counterfeiting Coalition, businesses worldwide lose an estimated $600 to 700 billion annually due to counterfeiting.
‎
“The NHL very much appreciates the efforts of HSI and local law enforcement to protect hockey fans from being victimized by counterfeiters and to ensure that legitimate businesses playing by the rules will not be harmed by these illicit activities,” said Tom Prochnow, group vice president, legal and business affairs for the NHL.