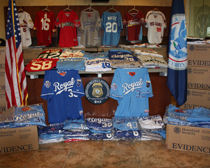 Fake jerseys, ball caps, t-shirts and other souvenirs are among the illicit merchandise and apparel confiscated by teams led by HSI, in partnership with MLB.

During the 14-day operation, HSI special agents seized 13,023 items in more than 30 targeted seizures of phony sports-related apparel, fake tickets and memorabilia for a total take of more than $540,000.

Authorities also closed a warehouse in Lenexa, Kan., which is believed to be responsible for distributing the majority of all counterfeit ball caps sold in the Kansas City area. This single operation nearly doubled the overall seizure amounts HSI special agents had prior to the start of the July 10 All-Star Game.

During this operation, nearly 20 percent of the items seized represent goods from other sports leagues, including the National Football League, the National Basketball Association, and the National Hockey League.