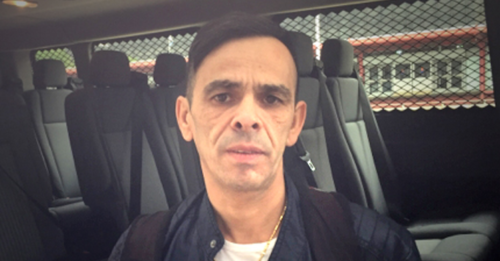 CLEVELAND–A Chilean man, who is wanted for questioning in his home country for his suspected role in an international theft ring, was turned over to authorities in Santiago Wednesday by officers with U.S. Immigration and Customs Enforcement’s (ICE) Enforcement and Removal Operations (ERO).

Carlos Fernando Orellana-Pizarro, 45, who has a robbery conviction in Germany, was repatriated on board commercial flights under escort by Cleveland-based ERO officers. After arriving at Comodoro Arturo Merino Benitez International Airport, ERO officers transferred Orellana-Pizarro to the custody of Chilean law enforcement. Orellana-Pizarro is named in an Interpol warrant as a person of interest for his alleged role in an international criminal syndicate responsible for armed robberies in Canada, the United States, Germany, Chile, Switzerland and Italy.

“Removals like this one are at the heart of what ERO officers do day in and day out,” said Rebecca Adducci, field office director for ERO Detroit, which covers Michigan and Ohio. “ICE will continue to move aggressively against those who are attempting to evade justice in their home countries.”

Department of Homeland Security databases show Orellana-Pizarro illegally entered the United States at an unknown date before being encountered by U.S. Border Patrol during a March 2016, traffic stop in Sandusky, Ohio. He was subsequently charged with immigration violations and transferred to ICE custody. In April 2016, an immigration judge ordered him removed, paving the way for his repatriation.