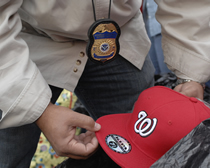 WASHINGTON–They gathered together in plain clothes, shared their strategy for the evening and headed off in separate directions. They were agents with U.S. Immigration and Customs Enforcement’s (ICE) Homeland Security Investigations (HSI). Their mission? To identify and confiscate counterfeit goods at a Washington Nationals game in Washington, D.C.

This particular evening was fairly quiet at Nationals Park. The baseball season was coming to a close, and the line of vendors heading into the stadium was not nearly as plentiful as previous games.

That didn’t stop a group of vendors, claiming to be part of a nonprofit organization, from selling counterfeit Major League Baseball hats that you can find on the page and shirts. Most vendors had legitimate booths, but this group was selling items out of large, black trash bags. The agents approached the vendors, inspected the goods, and confirmed what they already thought. The items were counterfeit.

The agents pulled the vendors aside and ran their information. One of the individuals had already been cited for selling counterfeit merchandise. Another was on probation for other criminal activity. They all received “cease and desist” notices. If they were caught again, they would be arrested for trafficking counterfeit goods, a felony charge.

“We often find that frontline individuals are part of larger criminal organizations,” said Torres. “Operations like this help us identify the root of intellectual property theft, which in turn preserves jobs and revenue for our country’s economy.”