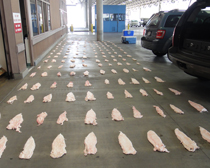 SAN DIEGO–Federal authorities Wednesday filed criminal charges against seven individuals for their role in plundering and smuggling swim bladders belonging to the endangered Totoaba fish that lives exclusively in Mexico’s Sea of Cortez.

Collectively the seven individuals, who were charged over the last three months in separate criminal complaints and indictments, are believed to be responsible for the illegal importation of more than 500 Totoaba bladders seized at the Calexico Port of Entry. The bladders, an ingredient in a centuries-old Chinese soup, are dried and then sold on the black market in Hong Kong and mainland China where they fetch as much as $10,000 each.

Agents with U.S. Immigration and Customs Enforcement (ICE) Homeland Security Investigations (HSI) and the U.S. Fish and Wildlife Service (FWS) began investigating the unusual smuggling activity in February after an officer with U.S. Customs and Border Protection (CBP) uncovered the first load of bladders in an ice chest buried under layers of non-regulated fresh fish.

“Earth Week reminds us all of the importance of protecting our precious resources,” said U.S. Attorney Laura Duffy. “Our nation’s laws prevent plundering and poaching for financial gain. We intend to enforce those laws with passion.”

“HSI is committed to using its investigative authorities and resources to combat all forms of illicit cross border trade,” said Derek Benner, special agent in charge for HSI San Diego. “This investigation not only thwarted the exploitation of an endangered species, it also exposed smuggling methods used to bring these specimens into the country and beyond.”

Two of the seven defendants are charged in a three-count indictment handed down by a federal grand jury in San Diego April 10. Jason Xie, a 49-year-old Sacramento businessman, and Anthony Sanchez Bueno, a 33-year-old Mexicali resident, were taken into custody March 30 by HSI and FWS agents in Calexico. Sanchez was arrested after driving a vehicle containing approximately 170 Totoaba fish bladders through the Calexico Port of Entry and delivering them to Xie. The two had arranged to meet in the parking lot of a fast food restaurant. Sanchez told investigators he was to be paid $700. The indictment also seeks the forfeiture of $350,000 in illicit proceeds from the sale of the Totoaba bladders.

“One of the highest priorities of the U.S. Fish and Wildlife Service Office of Law Enforcement is to investigate individuals and companies that are involved in the unlawful commercial trafficking and smuggling of protected animals and plants here and around the world,” said FWS Deputy Chief Edward Grace. “Many species, including the Totoaba, are teetering on the brink of extinction due to poaching to supply the illegal wildlife trade. While we may never know how many Totoaba bladders were harvested illegally, such disregard for the protections that were put in place to benefit this endangered species could have a disastrous effect on the fish population.”

Tototaba fish have been listed as an endangered species under the U.S. Endangered Species Act since 1979. Because the species is federally-protected in both the U.S. and Mexico, it is illegal to take, possess, transport or sell Totoaba. The fish, which can measure up to seven feet long and weigh more than 200 pounds, are known to live for up to 25 years.