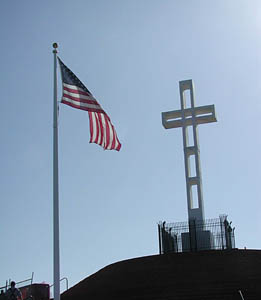 SAN DIEGO – A federal judge on Thursday issued an order from the bench Thursday declaring that the the display of a 43-foot cross on Mt. Soledad violates the Establishment Clause of the Constitution, and ordered it removed from federal property.

U.S. District Judge Larry A. Burns said the cross, which sits atop of a war memorial in La Jolla, must be removed from the property in 90 days. However, the ruling can be appealed by proponents of the cross.

The cross was challenged in a lawsuit by the Jewish War Veterans of the United States of America and several local residents, all of whom were represented by the American Civil Liberties Union and the ACLU of San Diego and Imperial Counties.

“We support the government paying tribute to those who served bravely in our country’s armed forces,” said Daniel Mach, director of the ACLU Program on Freedom of Religion and Belief. “But we should honor all of our heroes under one flag, not just one particular religious symbol.”

The cross was erected in La Jolla in 1954 and was dedicated at an Easter Sunday ceremony describing the monument as “a gleaming white symbol of Christianity.” In 2006, the federal government, through an act of Congress, obtained the title to the cross and its surrounding property by eminent domain, and declared the cross to be a national war memorial.

“A national war memorial should stand for all of those who served,” said Norma Chavez-Peterson, executive director of the ACLU of San Diego and Imperial Counties. “It is inappropriate and unconstitutional to declare a deeply religious symbol that excludes those outside of that faith as a monument to all veterans.”

The U.S. Court of Appeals for the 9th Circuit ruled in 2011 that the cross violated the First Amendment. After the U.S. Supreme Court declined to hear the case, it was remanded back to federal court where today’s order was issued.