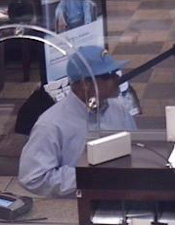 On Tuesday, May 25, at approximately 3 p.m., the Union Bank, 4225 Genesee Avenue, San Diego, California, was robbed by an unknown male using a demand note. After receiving money from the teller the robber walked quickly out of the bank.