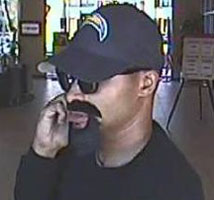 SAN DIEGO–Police and FBI are asking the public’s help to identify the individual responsible for the robbery of the Mission Federal Credit Union in San Diego.

The bank, located at 269 West Washington Street, was robbed on September 16.

On September 15, at approximately 4:58 p.m., the Mission Federal Credit Union was robbed by an unknown male. At the time of the robbery, the robber entered the bank and approached the victim teller and made a verbal demand for money. The robber repeated his demands to several other tellers. After receiving a sum of money from the victim teller the robber exited the bank and was last seen travelling southbound towards University Avenue. No injuries were reported.

The robber is described as Hispanic or black in his early 30s, height: Approximately five feet, six inches tall with a medium build, and weight approximately 165 to 170 pounds. He was last seen wearing a black long-sleeved t-shirt, blue jeans, baseball cap with San Diego Charges lightning bolt insignia, black sunglasses, and a fake mustache and beard.