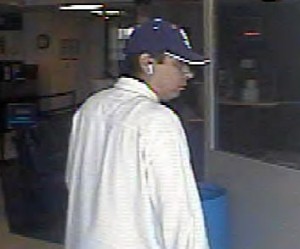 On Friday, July 16 at approximately 2 p.m., the North Island Credit Union, 45 North Broadway in Chula Vista was robbed by an unknown male using a demand note. The robber entered the bank and stood in the customer line, waiting for the next available teller. A teller called for the robber to come to their window. When the robber arrived at the window, he was holding a standard envelope with the demand note placed on top of the envelope. The teller opened the cash drawer and provided the robber a sum of money. The robber reached forward, grabbed the money, and put the money into his pants pockets. The robber exited the bank through the north.

The robber is described as a male Hispanic, mid 20’s, 5’8” – 5’9” tall with a thin and muscular build, 180 lbs. with a close haircut around ears and back of head. He has tattoos on his left arm, left forearm, and left wrist. He was last wearing a Navy blue baseball cap with white insignia, white tank top, blue jeans, and sunglasses

Anyone with information concerning this robbery should contact the FBI at telephone number (858) 565-1255 or www.crimestroppers.com.