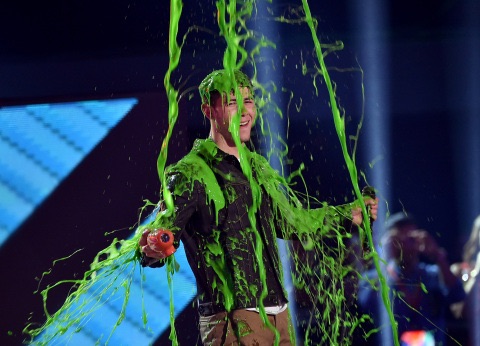 Hosted by recording artist/actor and kids’ pick for Favorite Male Singer Nick Jonas, the awards were broadcast from Los Angeles’ legendary “Fabulous” Forum, where kids celebrated their favorites from the worlds of film, music, television and more. Kids from around the world cast more than 500 million votes, a record-breaking tally.

Host Jonas opened the show with a stunning performance of his Billboard Top 10 smash, “Chains,” and number-one radio hit, “Jealous.” Backed by tween metal trio Unlocking the Truth, his theatrical set also featured a celeb-filled video montage, 3D elements and aerialists. Hip-hop phenomenon Iggy Azalea was joined by Academy Award- and Grammy-winner Jennifer Hudson onstage in a bold and dynamic rendition of their hit “Trouble,” which continued the storyline of their popular music video. In an epic finale, Aussie pop-rock band 5 Seconds of Summer’s powerful performance of “What I Like About You” literally blew out the slime-filled speakers, flooding the stage with thousands of gallons of slime.

This year’s Kids’ Choice Awards proved to be as messy as ever, from Jennifer Lopez presenting Jonas with his award and a surprise sliming; to the Favorite Family TV Show stars of Modern Family getting doused in goo; Jonas chugging a mug of slime in a “Dare or Dare” slime challenge; and a backstage pie fight between Chris Pratt and the cast of Henry Danger.

The stars of The Thundermans cleaned up the special live vote during the show, which garnered over 7 million votes. They beat out the casts of Bella and the Bulldogs and Nicky, Ricky, Dicky & Dawn and received the deluxe treatment from the first-ever human slime car wash complete with conveyer, spinning brushes, swinging flaps, spraying nozzles and, of course, tons of slime.

Kids and families paid tribute to their favorites by casting votes in 21 categories, from Feb. 20-March 28, including the newly introduced Favorite Talent Competition Show, Favorite Family TV Show, Most Addicting Game and Favorite New Artist. Fans were able to vote for their favorites across all of Nickelodeon’s digital platforms including Nick.com and the Nick apps.

Favorite Movie Actor
Ben Stiller (Night at the Museum: Secret of the Tomb)