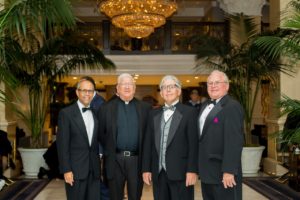 SAN DIEGO–Last month, philanthropists made a record-breaking investment in a brighter future for children who are homeless in San Diego.

“San Diego is in the midst of a homelessness crisis, and the success of this event shows that the community is willing to invest in much-needed solutions,” said Deacon Jim Vargas, president and CEO of Father Joe’s Villages. “I felt a deep sense of hope after spending the evening with hundreds of generous community members, each committed to solutions that end homelessness for children in our community.”

Father Joe’s Villages’ programs for children equip them with the tools needed to break the cycle of homelessness. This includes safe housing, medical and dental services, mental health support, nutritious meals, guidance toward life and scholastic goals, and opportunities for their parents to work toward self-sufficiency, too.

Homelessness is a growing issue that affects about 1.6 million children across the nation, and thanks to supporters at the Children’s Charity Gala, those in San Diego will have access to the housing and resources to succeed. The National Alliance to End Homelessness estimates that there are 550,0000 unaccompanied youth up to age 24 and 380,000 of those are under the age of 18, 2,000 of them in San Diego.