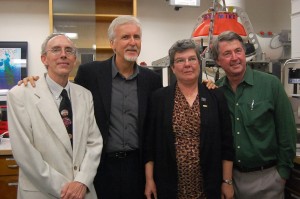 LA JOLLA–“I’m the king of the world!” bellowed Hollywood director James Cameron. And he was! The year was 1997 and he had just been honored as Best Director by the Academy of Motion Picture Arts and Sciences 0rganization for his work on the blockbuster movie Titanic. Nominated in 14 categories, the cruise ship epic won a total of 11 Oscars. All About Eve, starring the late great Betty Davis and filmed in 1950, was the only other Hollywood movie to receive 14 Oscar nominations. In 1997, Cameron could claim the title of “King,” at least for Hollywood.

On May 31, Cameron was at the Scripps Institution of Oceanography on the campus of the University of California, San Diego (UCSD) to be crowned king of a different sort, one might say. The world-renowned director was the recipient of the prestigious 2013 Nierenberg Prize for Science in the Public Interest. On March 26, 2012, Cameron plunged solo 11 kilometers, or 6.8 miles, below the surface of the ocean in a one-man submarine to reach the Challenger Deep in the Pacific Ocean’s Mariana Trench.

He became the first solo diver ever to reach such astonishing depths. “I saw things at that depth that no human eyes in the world had ever seen,” he boasted proudly. The expedition was to further deep-ocean research and exploration known as the DEEPSEA CHALLEGE, and was jointly sponsored by Cameron, National Geographic and Rolex.

A deep-sea explorer for at least ten years, Cameron contends that he is not a scientist, though he is a National Geographic explorer-in-residence. “I might be called a science groupie,” he laughed. After a few moments of deep thought, he admitted that he had always been fascinated by both Science and the Arts. “I might have been a scientist,” he opined, “but the Arts won out.” It is notable that he often combines both as illustrated by such science-fiction films as Avatar, The Abyss, Aliens, and The Terminator.

Cameron had previously donated an extreme-depth unmanned undersea exploration system known as a “lander” to the Scripps institution for future research and exploration. The Nierenberg Prize includes a bronze medal as well as a $25,000 cash prize. Cameron will donate that money to Scripps to help finance a new and improved “Lander Lab.”

The Scripps Institution of Oceanography is one of the world’s most significant global science education and research centers. It’s vast scientific scope includes biological, physical, chemical, geological, geophysical and atmospheric studies of the earth as a system. Today, at least 65 countries are operating scientific research programs worldwide. With a staff of approximately 1400 and a budget of about $170 million, the Institution operates robotic networks, a research platform for global exploration, and four oceanographic research ships comprising one of America’s largest academic fleets.

On hand for the presentation as well as the exploration was Doug Bartlett, Scripps Professor of Marine Biology and chief scientist of the DEEPSEA CHALLEGE expedition and Kevin Hardy, Scripps Development Engineer and developer of the “lander” instruments, which helped make the CHALLENGE expedition an astounding success.