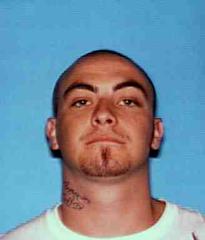 ESCONDIDO–Investigators are searching for a 28 year-old Escondido man who stabbed his step-father multiple times during an argument at a residence, Escondido police said Monday.

Officers responded to the 100 block of North Beech Street after receiving a call of a family disturbance. Officers arrived on scene and learned that Travis Thomas had become involved in an argument with his step-father. The argument led to Thomas stabbing the victim with a knife and inflicting serious injuries, including a life threatening stab wound to the neck. Thomas fled the scene prior to the officer’s arrival. The victim was transported to Palomar Medical Center where he was treated for multiple stab wounds. The victim is in stable condition.

There is probable cause to arrest Thomas for attempt murder. Thomas is described as a white male adult, six foot tall, 195 pounds. His head is shaved and he wears a goatee. Thomas is armed and dangerous. Anyone with information as to the whereabouts of Travis Thomas should contact the Escondido Police Department.