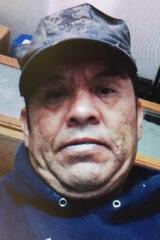 ESCONDIDO–Investigators continue their search for a 50 year-old Escondido man wanted in connection with the shooting death of his estranged wife last weekend in an unincorporated area of Escondido.

Escondido police say the suspect, Juan Garcia, who also goes by the name of Jose Luis Paredes, allegedly murder his wife, Teresa Ortiz in the 3000 block of North Broadway. Garcia‘s SUV was found abandoned near the crime scene, but he remains at large.

Garcia may be carrying a large semi-automatic handgun and should be considered armed and dangerous. Although Garcia is a longtime resident of the Escondido area, he is also a Mexican national and may attempt to flee the country, authorities say.

Garcia is approximately five feet, eight inches tall, and 170 pounds with brown eyes and curly, shoulder length black hair. He is clean shaven and has a small tattoo on the outside web of his right hand. He has used a variety of names and dates of birth. At the time of the homicide Garcia was wearing a blue, long sleeve shirt, blue denim shorts, long white socks and white tennis shoes.