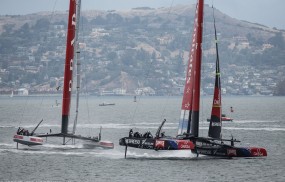 The two finalists know each other well beyond the racecourse. Luna Rossa purchased a first-generation design package from Emirates Team New Zealand to jump start its program after entering the 2013 America’s Cup late. Then the teams spent time testing and trialing in New Zealand.

“Our boat is a first generation and the boats aesthetically look similar, but there are quite a few differences,” said Luna Rossa helmsman Chris Draper. “If we had the opportunity to redesign things then there are things we would’ve designed differently, which I imagine are the things they’ve done differently with their second boat. At the same time, there’s not another design package we would’ve chosen to share.”

Luna Rossa comes into the match having completed a 4-0 sweep of Artemis Racing in the semifinal round. Emirates Team New Zealand hasn’t raced since July 28, when it clinched its place in the Louis Vuitton Cup Final with a 3-minute, 20-second victory over Luna Rossa.

The Kiwis haven’t been standing pat. They spent a week in the boatshed carrying out maintenance and refinements, practiced for a couple of days and then returned to the shed for more refinements. They haven’t sailed a great deal, but recent practice sessions were very pleasing to skipper Dean Barker.

“We set a new top speed record the other day at the end of practice,” said Barker. “I can’t say what it is, but almost every day the boat’s going faster and faster and becoming more efficient. There are pretty good smiles coming off the boat.”

The upcoming series is a best-of-13, meaning the first to score 7 points will be the winner. Two, five-leg races are planned per day, the first start scheduled at 1:10 pm PT and the second at 2:10 pm. Each race will last approximately 25 minutes, and there’ll be a break of about 30 minutes between races. This same format will be used next month in the America’s Cup Final.

“Things are very different now compared to the round robins and semifinal,” said Barker. “There’s greater emphasis on the start and the first reach and getting out of Mark 1 in good shape. We’ve seen it hard for the guy behind to gain enough leverage to really attack. If you can get around the leeward gate ahead you have a very good chance to shut things down.”

Luna Rossa skipper Max Sirena agrees. “The pre-start is important because if you arrive at the reach mark ahead you have a better chance to lead at the bottom gate. There aren’t many options from a tactical point of view. We need to have a good pre-start. We will push hard in the pre-start to be leading at the reach mark.”