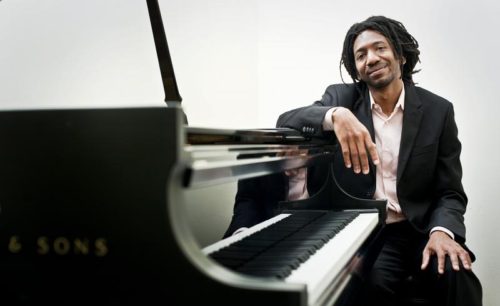 To set the stage for this unique live performance, Villafranca explained to the standing-room only audience the inspiration for Cinqué – Music of the Caribbean. “I chose five islands with five stories: Cuba, Puerto Rico, Haiti, Jamaica and Santa Domingo. This suite reflects the entire range of my upbringing as a musician in the Caribbean and in Cuba,” says Villafranca.

As so often in the Americas, Cuba, Puerto Rico, Haiti, Jamaica and Santa Domingo’s music was fundamentally shaped by the slave trade; and among the islands a rich, distinctive and diverse styles of music was created, among these were bomba and plena, which are the most prominent genres. The bomba, with roots in West Africa, is thought to have originated when slaves from different plantations were allowed together and celebrate together. Its instrumentation is compressed entirely of percussion instruments: two barrel drums (called barril primo and barril Segundo), a pair of hardwood sticks called “cuas” and “maracas.”

Plena developed from bomba music around the beginning of the 20th century in southern Puerto Rico. Plena lyrics are narrative. They convey a story about events, address topical themes, often comment on political protest movements, and offer satirical commentaries.

“This is my largest musical work to date,” exclaims the Cuban composer and piano virtuoso. “I have been integrating the roots of the Cuban Congolese tradition that I grew up with as a child into my music, with my training in classical music and also with my inspiration and interest in the entire Caribbean Diaspora. Since I come from a Congolese area (the Tambor Yuka community of Cuba), I wanted to explore all of those traditions in a much broader way.”

Cinqué – Music of the Caribbean is a five-movement work inspired by the life of Joseph Cinqué, a West African born man of the Mende people, born in Sierra Leone who led a revolt of fellow slaves aboard the Spanish slave ship, La Amistad and gained his freedom. 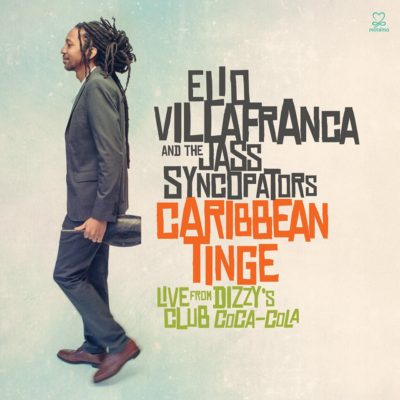 Elio Villafranca’s latest CD ushered in a New Renaissance of Western Caribbean Latin music unlike anything on the Latin music scene today.

The introductory selection, Cinque – The Capture – Troubled Waters, was built upon a marvelously intricate weave of ensemble playing and inventive solos. Villafranca’s soft opening piano melody lays a trail for the brass. Even when approaching a tune from the perspective of a slave on a slave ship, Villafranca did so unambiguously as a classically trained pianist. His conception and interpretation of this piece is built on a calypso rhythmic motif, and could have been attempted by any jazz pianist of superior interpretation, with no regard to cultural background. It was if Villafranca nod toward an aspect of his heritage and his desire for the audience to feel the pain of Cinque without immersing himself in it; in this respect Villafranca’s ties to his roots is even more compelling.

In this portion of the suite Villafranca introduces a delightful singer, Pauline Jean, who serves as a reminder of the importance of Paracumbe, which is one of the leading “folkloric” revival of the Puerto Rican people; and while the word may suggest artificial, tourist-oriented music to English ears, the reality on the ground is very different. Pauline engages in an enchanting “Paracumbe bomba,” which is traditionally sung by women, which was a beautiful call-and-response song that originated on the southern part of the island of Puerto Rico by slaves who were from Cuba and Haiti.

Pauline introduces, with the ensemble edging her on, a West African sound into the mix, her elusive and subtle approach created cross-cultural connections without losing any of the music’s original magic.

In this dazzling repertoire Villafranca leads the ensemble from the piano, and occasionally got up from the piano to interact with the band, maintained a seamless flow of music and solos which reflected an eclectic and encyclopedic knowledge of Cuban music, the Western classical tradition and jazz. Here you had excellent percussionists at work. Villafranca presented an invigorating interpretation based first on dazzling melodic concepts, which he followed carefully, even delicately, never letting himself be sidetracked by overplaying. The band played mostly for him to the delight of the audience!

To the very end of the refreshing Diana-Comparsa selection, Villafranca gave even greater exposure to his romanticism and flair for drama. The piece was electrifying which featured duets and solos among the musicians driven by an extraordinary sensuous fusion of technique and expression.

Elio Villafranca has created a unique sound with Cinqué – Music of the Caribbean, drawn from the spirits of slaves whose culture and souls refused to be crushed. But most importantly, like his fellow brother/artist PRINCE, whom the musical universe lost on April 22, 2016, the message Villafranca teaches us through this masterpiece is that the human spirit cannot be held in chains, shackled and suppressed forever – someday we all shall be free!