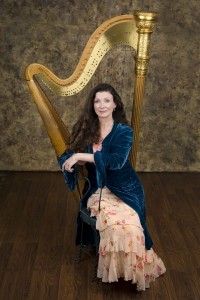 EL CAJON—The city continues to celebrates its centennial with a free concert by singer and harpist Mair Rathburn.

Rathburn brings her musical fun in vintage costume to the El Cajon Library, 201 E. Douglas Avenue at 2 p.m. on August 12.

Rathburn is a historical interpreter at the Cosmopolitan Hotel in San Diego’s Old Town State Park, so it piqued her interest when, at a previous Acoustic Showcase concert, she saw the library’s mural depicting the history of El Cajon.  As the year 2012 celebrates the Centennial of the City of El Cajon, Rathburn was inspired to return to the library with a musical, historical version of the mural.

Those attending the concert will hear stories about life in El Cajon from the days of the Kumeyaay up to the 1870s, as Mair brings the library mural to life with songs like Oh Susanna, Turkey in the Straw, Cielito Lindo, Aura Lee, Red River Valley, Shenandoah, and many more.

The concert is part of the San Diego County Library Acoustic Showcase series, and is sponsored by the Friends of the El Cajon Library.

Reservations are not required.