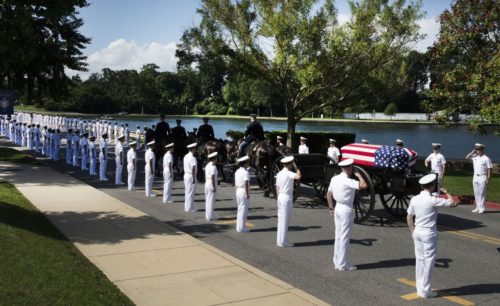 President Donald J. Trump is in charge of the United States Armed Forces and is referred to as the Commander in Chief of the Army, Navy, Air Force, Coast Guard, and Marine Corps. The president decides where troops shall be stationed, where ships shall be sent, and how weapons shall be used. All military generals and admirals take their orders from the president.

Arguably, the most solemn role of the president is to serve as the leader of the military forces. Under the president’s direction, the United States can carry out retaliatory invasions, such as the invasion of Afghanistan in 2001. Wars can be indirectly prompted or unprompted, as with the U.S. invasions of Iraq in 1990 and 2003. U.S. military involvement can be massive, like that in Vietnam and Korea. Or the U.S. military can strike from the air, as occurred against Iraq under President Bill Clinton in 1998 or the Special Forces invasion of Panama in 1989. The United States can commit troops to larger organizations of which it’s a member, like NATO and the United Nations. All of these actions share the commonality of being ordered by the president of the United States.

One of the most sacred and honorable duties the president must demonstrate is his willingness to put aside petty differences and animosities – and give honor and respect to fallen veterans who served his/her country with valor, honor and distinction. President Trump did not show that respect to Senator John S. McCain (1936-2018), a respective former U.S. Senator, U.S. Congressman, U.S. Naval fighter pilot, and a former Prisoner of War (POW).

During the August 24-30, 2018, American Legion 100th National Convention in Minneapolis, several members of the traditionally conservative veterans group ridiculed President Trump for his “disrespectful” treatment of the late Senator McCain.

American Legion members who attended the convention in Minnesota said they supported the veteran organization’s statement which ridiculed President Trump for the back and forth debacle of not flying the flag at half-staff following Senator McCain’s passing this past week. While several of the country’s nearly two million Legion members told reporters covering the convention they still support President Trump, many said he “tweets too much” and were “hurt” by the president’s repeated disrespect of Senator McCain even after his death.

No president in modern history has ever shown such callous and blatant disrespect for a former POW – ever! Except for this president.

What the American Legion and other veteran organizations who support the president failed to realize is that they too have failed the true test of leadership.

Where were the Disabled American Veterans, the American Legion, and other veteran service organizations when then candidate Donald Trump declared openly in the Republican primaries that he didn’t like “when soldiers are captured,” and made the bold proclamation that “McCain is only a hero because he was captured.”

Where were the Legion leaders and officers when President Trump stood in front of the podium at their convention and declared openly that the press who were present were “enemies of the people?”

All of these institutions failed to forcefully and unequivocally disavow such comments and turned a blind eye and gave Trump a slap on the wrist with no real consequences. Which is no wonder President Trump can operate without impunity in asserting such vile and vicious statements about Senator McCain – because he knows that there will be no call for punishment from the Republican Party establishment and its supporters as long as he gives them what they want.

May we remind the American Legion and our fellow Americans that Senator McCain and the hundreds of former POW – living and deceased, gave the ultimate sacrifice in defense of the United States Constitution against all enemies foreign and domestic – not loyalty to a president.

President Trump has demonstrated that he is either ignorant of his sacred duties to honor ALL POW, or he simply chooses to selectively elevate whom he wishes to honor. There can be no such distinction.

It has become increasingly obvious that President Trump lacks or is voided of empathy and compassion for human beings who do not share his background, experiences and ideology.

President Abraham Lincoln grew up in poverty in a one room log cabin with a dirt floor. President Franklin D. Roosevelt experienced a debilitating disease that confined him to a wheel chair. And while the qualities of compassion and empathy are not limited to those leaders who experienced difficult circumstances earlier in life, it should be remembered that great leaders such as Dr. Martin Luther King, Jr., Mahatma Gandhi, Nelson Mandela and Senator McCain experienced unimaginable pain and suffering at the hands of their fellow human beings, but still managed to show empathy.

In this day and age when the American people are facing not only an onslaught of fear, political and religious tribalism, questions of whether freedom will prevail, but also whether it will even endure, the majestic and patriotic symbolisms of Senator McCain’s week long farewell memorial and burial at the United States Naval Academy provides us with hope.

Senator McCain, in his reassuring and optimistic farewell letter, summed it up best: “Do not despair of our present difficulties but believe always in the promise and greatness of America, because nothing is inevitable here. Americans never quit. We never surrender. We never hide from history. We make history. Farewell, fellow Americans. God bless you, and God bless America.”

Thank You Senator John Sidney McCain III for your Unselfish Service and Devotion to the United States of America.