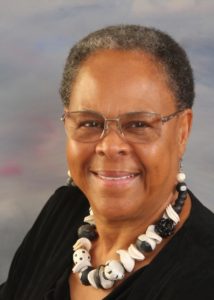 OCEANSIDE–Community activist Edith Jones was named 2016 recipient of the Oceanside Martin Luther King, Jr. Community Service Award at the annual commemoration celebration Monday hosted by the North San Diego County Branch of the NAACP and the City of Oceanside.

Jones has been a stalwart volunteer for local non-profit organizations. As a member of Soroptimist International, Oceanside-Carlsbad (SIOC) she has dedicated her time and talent to several fundraising events benefitting programs designed to improve the lives of local women and girls. Since becoming a member of North County African American Women’s Association (NCAAWA), she has introduced the organization and community to “The Author’s Garden Tea Party,”  “Grooving on the Green,” a “New Year’s Eve Gala,”  and “Marching on the Fourth” (NCAAWA members in the Oceanside parade). She also has served on the NCAAWA Board of Directors for several years, and as board president for the past two.

She has been a member of the Board of Directors of the Women’s Resource Center (WRC) for the past six years. She also donates her time and resources to support continuation of the many programs offered by WRC that benefit the women and children who are victims of domestic violence. She has also donated, or provided at greatly reduced rates, her photography skills to The Boys and Girls Clubs of Oceanside, the Friends of the Oceanside Public Library, KOCT-Community Television, NCAAWA, North County Health Services, North County Philanthropic Council, SIOC, Vista Community Clinic, and many other local non-profit organizations.

The Community Service award is an annual award given to a resident of the City of Oceanside or Marine Corps Base Camp Pendleton who exemplifies the ideals and teachings of Dr. King and who has served the community in volunteer activities over a long period of time.