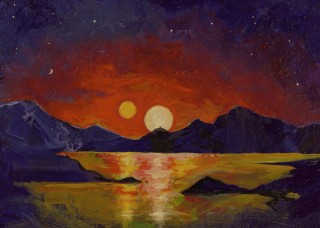 SALT LAKE CITY–(Newswise)–Luke Skywalker’s home in “Star Wars” is the desert planet Tatooine, with twin sunsets because it orbits two stars. So far, only uninhabitable gas-giant planets have been identified circling such binary stars, and many researchers believe rocky planets cannot form there. Now, mathematical simulations show that Earthlike, solid planets such as Tatooine likely exist and may be widespread.

“Tatooine sunsets may be common after all,” concludes the study by astrophysicists Ben Bromley of the University of Utah and Scott Kenyon of the Smithsonian Astrophysical Observatory.

“Our main result is that outside a small region near a binary star, [either rocky or gas-giant] planet formation can proceed in much the same was as around a single star,” they write. “In our scenario, planets are as prevalent around binaries as around single stars.”

The study has been submitted to Astrophysical Journal for review, but as is the custom in the field, the authors have posted the unreviewed paper on the scientific preprint website ArXiv (pronounced archive).

With “Star Wars: Episode VII – The Force Awakens” due to hit movie screens Dec. 18, fans of the epic series may be cheered at the possible reality of planets like Tatooine, home planet of both Luke and Anakin Skywalker, meeting place of Obi Wan Kenobi and Han Solo and the domain ruled (until his death in battle) by crime lord Jabba the Hutt. Luke stares at Tatooine’s double suns setting in a classic film moment.

The title of the new study is “Planet formation around binary stars: Tatooine made easy,” but the paper looks anything but easy: it is filled with mathematical formulas describing how binary stars can be orbited by planetesimals – asteroid-sized rocks that clump together to form planets.

“We took our sweet numerical time to show that the ride around a pair of stars can be just as smooth as around one,” when it comes to the early steps of planet formation, Bromley says. “The ‘made easy’ part is really saying the same recipe that works around the sun will work around Tatooine’s host stars.”

The study was funded by NASA’s Outer Planets Program and was a spinoff of Bromley’s and Kenyon’s research into how dwarf planet Pluto and its major moon, Charon, act like a binary system. Both are orbited by four other moons.