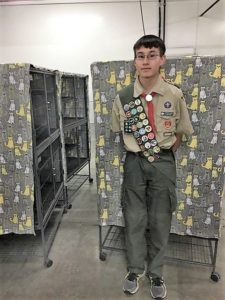 SAN DIEGO–The San Diego Humane Society holds kittens in kennels until they are old enough for adoption but to keep them safe and happy they use curtains over the tops, sides and backs of the kennels.

The curtains stop the spread of infectious diseases such as URI (Upper Respiratory Infection) that is transmitted with coughing and sneezing by blocking the sneeze droplets and coughing from reaching other kittens in adjacent kennels. The curtains are made of a cotton flannel with cat designs on them that make the place look better than bare kennels sitting around.

Additionally, they put the kittens in a warm, enclosed environment make them feel safer.

Derek Chow, a 14-year-old Boy Scout Boy, as part of his Eagle Rank Leadership Project, decided to fill that need by creating kitten curtains for the Humane Society.

Chow has previously volunteered at the Rescue House and to help socialize kittens before they were adopted to make them more accustomed to other people. He then went on to sew 19 cat blankets that went to newly adopted cats going home in carriers. This lead him to want to do his Eagle Project for cats, but as the Rescue House had no actual building, he instead went to the Humane Society where they recommended the kitten kennel curtain project to him as a possible Eagle Project. That is where he started his journey down the path to Eagle Scout.

The guiding tenants of Boy Scouting are the twelve points of the Scout Law, and among these is “A Scout is Helpful” and Chow felt it was important that the much needed curtains be made by him and the other Scout volunteers. In planning this project, Chow spent many months assessing how to best benefit the society’s mission.

During the process of performing his Eagle Scout Leadership project, he learned how to properly plan, organize, lead and execute a large project. His planning efforts included budgeting and funding the project by asking for donations and his goal wasn’t just to complete a project, but to create something that would make an actual difference. During this phase he needed to find multiple sewing machines and train volunteers to use them to guarantee their quality construction.

The kitten curtain building phase required the coordination of friends, family, and Boy Scout Troop 667 members to cut fabric based on a pattern, pin the fabric together, and then sew along the correction seams to create the final product. When problems arose during the building phase, Chow was able utilize his leadership skills and resolve these difficult issues in order to complete the proper assemblies. There were two full days in the first construction phase.

The project had two main phases, pinning and sewing. There were two different pinning sessions as well as three sewing sessions with the cutting of the fabric at the beginning. Each curtain he made required five yards of fabric to make, using dozens of yards of fabric to create 15 curtains. He started by having some friends assist in cutting all the fabric to prepare it for the pinning task. Two weeks later, scouts from his Boy Scout Troop, Troop 667 gathered to pin the top piece of fabric to the two sides and the back. This created a line of pins in the fabric that guides the sewers who began two days later. The sewing group of scouts spent most of the day using sewing machines to sew the fabric along the pin line made by the pinners. They also created a hem on the front, which is when the fabric is folded over and sewn so it doesn’t unravel.

A week later, another group of boy scouts went to help him pin his fabric again, this time it was to pin the sides to the back, creating a solid 3D shape. This pin line was again sewn over when the next sewers sewed the back to the sides and the bottom hem of the curtains. The project finished when an experienced sewer and his mom came over to assist in doubling over the hem and reinforcing the corners of the fabric. After a month and a half of work, the project finished and was delivered to the Humane Society on March 7 where all the curtains fit perfectly.

“Derek did an outstanding job on his Eagle Project and showed exceptional commitment throughout. Derek took the initiative to contact our shelter to find out how he could help, and then he made a plan, kept me posted regarding his progress, and completed the promised number of kitten curtains earlier than expected,” said Staci Hurley, an educator with the Humane Society.

The San Diego Humane Society Kitten Nursery, the first of its kind in the nation, opened in 2009 and in 2016 helped nearly 3,500 kittens.

This is the culmination of a journey started when Chow joined Scouting as a 10-year-old from Pack 675. He entered the Narwhale patrol where he connected with other new scouts his age. He quickly began moving up the ranks in the troop and earning merit badges that enhanced his scouting skills. While some of his friends chose to give up their scouting experience in favor of other activities, Chow stayed with the program and is currently the Senior Patrol Leader of Troop 667, one of the highest position a scout can hold in their troop. While this has certainly not been easy for him, he believes that it has let him learn a lot about who he is and what he can accomplish.

“Scouting has been a very rewarding experience for me.” Chow said, “It’s taught me that I can make a difference in the world and lead others to do the same thing.”

Chow thanked his parents for supporting and helping him throughout his time in Boy Scouts, and acknowledges that he would not be where he is without their help.

Boy Scouts of America’s program goal is to contribute to the development of young people in achieving their full physical, intellectual, social and spiritual potentials as individuals, as responsible citizens and as members of their local, national and international communities. Boy Scouts Troop 667 instills a responsibility for leadership and preparedness in its members.

Boy Scout Troop 667 was founded in 1988 and meets at St. Timothy’s Church in Rancho Peñasquitos.