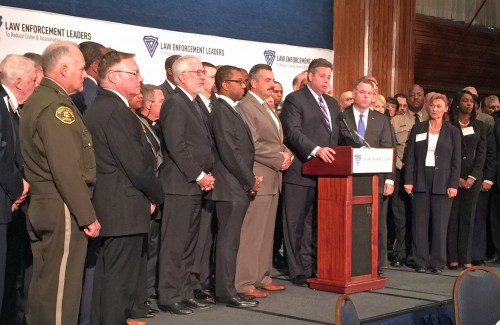 The law enforcement leaders have formed a group called Law Enforcement Leaders to Reduce Crime and Incarceration in order to push for alternatives to arrests, restore balance to criminal laws, reform mandatory minimum prison sentences and strengthen community law enforcement relationships. Members will meet with President Obama to discuss those issues on Thursday.

“Today, I stand with my law enforcement counterparts from across the country in calling for criminal justice reform,” DA Dumanis said. “This new coalition will focus attention and momentum on appropriate alternatives to incarceration that will continue public safety and on alternatives that can be made in a thoughtful way and that will include resources for treatment.”

The group includes the police chiefs of the nation’s largest cities such as William Bratton of New York, Charlie Beck of Los Angeles and Garry McCarthy of Chicago, as well as prosecutors from around the country, including DA Dumanis, Benjamin David, the DA for New Hanover and Pender County, North Carolina as well as Cyrus Vance Jr., the Manhattan District Attorney.

The group officially announced their launch at an afternoon news conference in Washington D.C. today citing that incarceration in the United States has reached a crisis point and that over-relying on incarceration does not help bring down crime. In fact, incarcerating non-violent offenders for low-level crimes such as drug offenses, can take time and vital resources away from preventing serious and violent crimes.

The Law Enforcement Leaders group says more than 50 percent of prison and jail inmates today have a diagnosed mental illness, and 65 percent of prisoners meet medical criteria for substance abuse and addiction. Many of these individuals need treatment, not arrest and jail time.

The agreement is that the criminal justice system cannot serve as a treatment plan. Instead, the group supports policy and practice changes within law enforcement agencies that offer alternatives to arrest and prosecution. The group urges police departments and prosecutors’ offices to adopt policies that prioritize mental health and drug treatment instead of arrests and prosecution, when law enforcement has the discretion to choose this alternative and it would not harm public safety.

Reducing incarceration will improve public safety because people who need treatment for drug and alcohol problems or mental health issues will be more likely to improve and reintegrate into society if they receive consistent care, something relatively few jails or prisons offer.

The wide range of the group’s membership – with more than 130 leaders from all 50 states, every part of the country and political spectrum – signals the deep commitment that exists within its ranks to reduce incarceration.