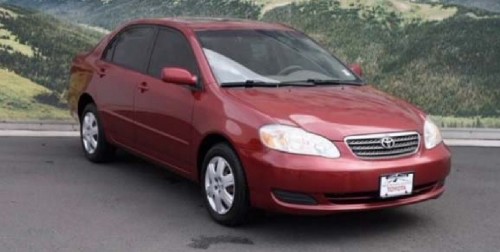 Detectives are searching for a 2005-2006 Toyota Corolla that hit a female pedestrian.

LEMON GROVE–San Diego County Crime Stoppers and investigators from the San Diego County Sheriff’s Lemon Grove Station are asking for assistance from the public to help identify and locate a suspect wanted for a felony hit‐and‐run.

Investigators said that on April 17 at about 12:30 a.m., 18‐year‐old Ana Chavez was struck by a vehicle as she was crossing the street in the 2000 block of Lemon Grove Avenue. Chavez’s friends witnessed the crime and could not describe the driver but said the vehicle was a small, red, sedan with dark tinted windows. The vehicle failed to stop at the scene.

Based on the vehicle parts that were scattered on the roadway after the collision, investigators believe that the car probably sustained minor to moderate damage on the right, front side of the bumper and side mirror. Further investigation revealed that those vehicle parts belong to a 2005‐2006 red Toyota Corolla.

Chavez suffered serious internal injuries and a broken leg. She is still hospitalized.

Detectives are asking anyone with any information on the location of these suspects to call Crime Stoppers anonymous tip line at (888) 580‐8477. Anonymous email and text messages can be sent in via www.sdcrimestoppers.com.