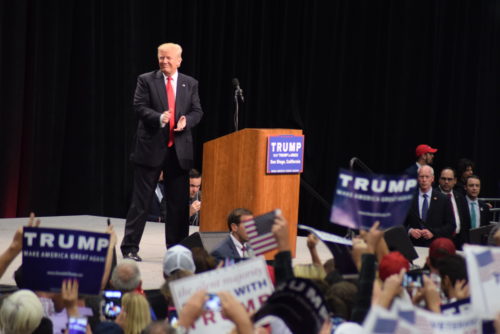 Prior to Trump’s 2 p.m. appearance, the rally, organized by San Diego businessman “Papa” Doug Manchester, featured remarks from Congressman Darrell Issa, Congressman Duncan Hunter, former Alaska Gov. Sarah Palin, Pat Smith, mother of Sean Smith who was killed in Benghazi, KUSI-TV contributor Mark Larson, who served as the rally’s master of ceremony, and members of Stolen Life, an organization comprised of mothers who lost their children to illegal immigrants living in the state.

“Are you ready for some relief from a least federal boneheadedness,” said Palin to the roaring crowd. “We are going to get government off your back and put it back on your side.”

Palin ridiculed the press by calling them the “lame stream media.”  Turning to look at the television cameras and journalists on the press riser, Palin lambasted the “sheep in the media.”

“Their head is still a-spinnin’,” she said. “Do you know how thoroughly distrusted you are, mainstream media? … He is now we the people’s nominee, so suck it up, cupcake!”

Most of the 10,000 attendees, waving “Veterans for Trump” signs and donning “Make America Great Again” baseball caps gave a thunderous applause when Trump stepped on to the stage.

Trump began his speech by paying tribute to a group of veterans at the rally. He invited the group to the stage and greeted each of them while shaking their hands.

Trump has been under fire from critics who accused the billionaire real estate mogul of not releasing details of the over $5 million dollars raised at a January charity event he hosted for veterans. He says on Monday or Tuesday he will release the names of recipients.

“We give to many, many groups and it’s pretty close to six million dollars that we raised, and it’s for our vets. And we love our vets,” Trump told supporters.

The real estate billionaire spoke about the five year-old Trump University class-action lawsuit filed by former Trump University students who claim they paid $35,000 each to attend the online school and received “empty promises.”

The Washington Post has asked U.S. District Judge Gonzalo Curiel, who is presiding over the class-action lawsuit, to unseal internal company documents related to the defunct Trump University.

Trump has denied any wrongdoing, and had asked the judge to throw out the case. The motion was denied by the judge who said the case should be heard by a jury. The judge scheduled the San Diego trial on November  28, after the presidential election.

He lashed out at the federal court system’s handling of his case calling it a “disgrace.”

“It’s a disgrace the way the federal court is acting because it’s a simple lawsuit,” Trump told his supporters. “There should be no trial. It should have been dismissed.”

Trump, not happy with Judge Curiel’s decision on the lawsuit, accused him of bias against him. Adding that the judge was appointed by President Obama.

“I have a judge who is a hater of Donald Trump. He is not doing the right thing,” Trump said. “I could have settled this case numerous times, but I don’t want to settle cases when we are right.”

Judge Curiel Friday granted the Post’s request and order the release of the documents.