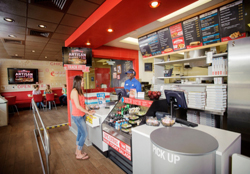 Domino’s Pizza unveils new logo. Will be seen on all new stores and those undergoing major renovations. (PRNewsFoto/Domino’s Pizza)

ANN ARBOR, Mich.–(PRNewswire)–Domino’s Pizza plans to bring the art and skill of pizza-making front and center with the release of its new ‘Pizza Theater’ store design.

After years of development and concept testing, the Domino’s Pizza store of the future will have its pizza-making artists on display as they hand-toss (emphasis on the “toss”!) fresh dough and custom-make customers’ orders.

Depending on square footage availability, the new store design allows flexibility for a number of features otherwise unheard of when it comes to the “traditional” Domino’s Pizza store. Some features include a comfortable lobby, open-area viewing of the food preparation process, including a step platform for children to see the action, and the ability to order from a kiosk and track carryout and pizza delivery orders electronically. The stores will also feature chalk boards to allow customers to express their creativity or to leave feedback for the store team members.

Some stores may feature a number of “grab and go” items, from salads and milk to cookies and mini dessert parfaits, in-store dining, and big screen televisions. Nearly a dozen of these concept stores have been built throughout the U.S., from Las Vegas, Nev., to Gulfport, Miss., so far this year.

The design concept is complemented by a new, single-tile logo – marking a significant change in the branding of the 52-year-old company.

“Everything started to come together in 2008, when we recognized the real need to change,” said Russell Weiner, Domino’s Pizza chief marketing officer. “We began to expand our menu, develop a whole new recipe for our pizza and come up with new, breakthrough ways to talk about our brand with consumers. We began to interact with customers in innovative ways through technology, mobile devices and social media.

“The next step in this process is to build the store of the future, featuring new store signage and a simple, visually striking logo – because we believe Domino’s has become an iconic global brand that is instantly recognizable,” Weiner continued. “We’d like to reach the point where we’re as recognized as the Nike Swoosh or the Golden Arches.”

All new stores built in the U.S. and a number of countries around the world will feature the new logo and key components of the new design. The company will also only allow existing stores that have undergone major updates and remodeling to use the new logo signage.

The new logo will appear in Domino’s marketing materials beginning in October.

If you want to start with your very own logo, just visit https://www.graphicsprings.com/start-your-logo and make one for your business.