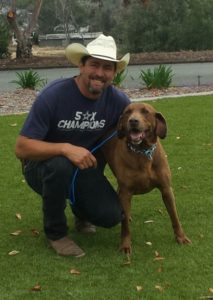 SAN DIEGO–A dog who disappeared three years ago from a small town on the New Mexico/Texas border is home safe after being found in San Diego county.

Ricardo Dominguez of Santa Teresa, New Mexico is a general contractor. He said Brownie traveled with him everywhere but three years ago he had a meeting and didn’t want to leave Brownie in his vehicle. He left the dog behind at his horse ranch with someone to watch over him. When Dominguez returned, the dog was gone and couldn’t be found. He suspects the dog was stolen.

Fast forward to late last week. Dominguez got a call from his girlfriend.

Dominquez drove 720 miles non-stop through the night Friday from a job site in El Paso, Texas to Bonita to pick up his dog.

“He looks up through the door at me in my cowboy hat, and his eyes were, wow is that you?” said Dominguez. “His eyes went wide, and he went wild, started dragging the person on the leash, and he came and jumped on me and went crazy!”

Dominguez says Brownie is healthy and happy to be back home but Dominguez can tell he’s not the friendly dog he was before. Brownie is more territorial and protective of his owners. Dominguez says he never trained Brownie that way and he’ll have to work with him to change that behavior. Nevertheless, he says he’s very happy he had Brownie chipped and is thrilled to have his dog back.

County Animal Services says a microchip is one of the best ways to ensure that a lost animal is found.

“I can’t tell you how many times a microchip has made all the difference in reuniting a lost pet with his owner,” said County Animal Services Director Dawn Danielson. “We have success story after success story. It’s such a small investment and the rewards are huge.”