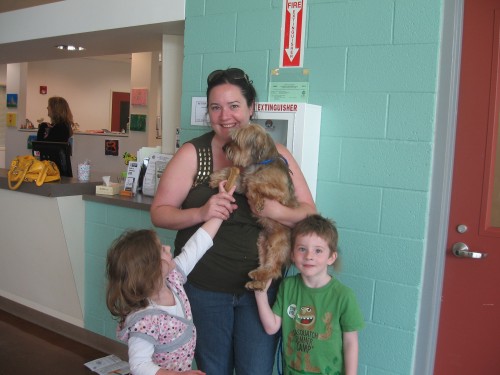 Tara Riley-Okane and her twins Clara and Rory, 5, reunite with Paddy at the County’s Carlsbad shelter. Courtesy photo.

CARLSBAD–A microchip the size of a grain of rice is responsible for yet another pet being reunited with its owner after an extended disappearance.

The rescuer brought the dog home to Rancho Bernardo and called Animal Services, which picked up the dog.

All stray animals are scanned for a microchip at County shelters, and this dog fortunately had one.

Staff contacted the microchip company for the owner’s information, and then called the incredulous Oceanside woman.

It turned out “Paddy,” a 4-year-old Terrier, had vanished from the home of Tara Riley-Okane in Oceanside eighteen months before.

When Riley-Okane adopted the dog from the North County Humane Society, she had debated having the dog microchipped, but ultimately decided to do it. Today she is happy she did.

Riley-Okane came to the County shelter in Carlsbad this morning and claimed her long-lost dog.

“The recent stories of

Cookie , J.J. and now Paddy being reunited with their owners prove that having your animal microchipped is truly your pet’s ticket home,” said Dawn Danielson, Director of the Department of Animal Services.

Microchips are available at all three County animal shelters every Thursday from 1 to 3 p.m.