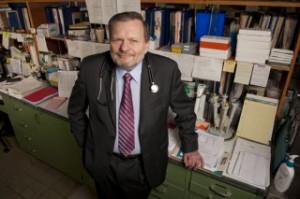 John Morley, M.D., is director of the divisions of geriatric medicine and endocrinology at Saint Louis University.  Photo by Steve Dolan

ST. LOUIS — (Newswise)–Everyone older than 70 should be checked for frailty, a condition that is both easily treated and potentially deadly, according to an article by representatives from six major international and U.S. medical organizations.

“Frailty is extraordinarily common, affecting between 5 and 10 percent of those who are older than 70. Women are more likely to be frail than men,” said John Morley, M.D., director of the division of geriatric medicine at Saint Louis University and lead author of the article that appears in the June edition of the JAMDA.

“Over a period of time, frailty leads to increased death rates, poor function and increased hospitalizations. It’s treatable and we’re asking doctors to spend 15 seconds to conduct a screening that could prevent bad outcomes.”

While they are not yet disabled, those who are frail have reduced strength and endurance and difficulty carrying out normal daily activities. They may lose weight, have multiple medical problems and are more likely to become dependent on others or even die. Their condition is tenuous; a health problem such as flu or a fractured hip can thrust them into disability or even could be deadly.

“Most people who are frail function reasonably well. However, these are the people who are afraid they’re going to fall and are too tired to get out and do things. Many times, they are not as enthused about eating as the rest of the population,” Morley said.

“If they walk into a doctor’s office, the doctor is likely to say, ‘You look fine.’ Yet their frail condition is highly predictive of a bad outcome and many times can be fixed if doctors and patients are aware of the problem.”

Representatives from international and national medical societies assembled last December to explore the characteristics of physical frailty and establish guidelines for treatment. The conference was convened in response to a white paper by the International Association of Gerontology and Geriatrics and World Health Organization recognizing the preference for older adults to age in their own homes instead of in long-term care facilities. The conference attracted experts in the field of frailty as well as representatives from the International Association of Gerontology and Geriatrics; Society on Sarcopenia, Cachexia, and Wasting Diseases; International Academy of Nutrition and Aging; European Union Geriatric Medicine Society; American Medical Directors Association; and American Federation for Aging Research.

In addition to recommending frailty screening for everyone who is older than 70, the group suggested checking “younger” older adults who have lost a significant amount of weight because of a chronic condition. The consensus recommendation is to use the simple FRAIL questionnaire that takes less than 15 seconds to administer, Morley said. Other low cost tools also can pick up on the problem.

The FRAIL tool asks five questions and those who answer yes to at least three likely are frail and should see a physician for treatment.

Fatigue: Are you fatigued?
Resistance: Do you have difficulty walking up one flight of steps?
Aerobic: Are you unable to walk at least one block?
Illness: Do you have more than five illnesses?
Loss of weight: Have you lost more than 5 percent of your weight in the past six months?

The key to treating frailty is figuring out its root cause. In many cases, once frailty is identified, it can be treated with aerobic and resistance exercise, protein and caloric supplements, vitamin D and reduced medications, the scientists agreed.

• Exercise: A number of studies show that exercise – sometimes as little as 45 to 60 minutes three times a week – has positive effects on frail older adults. It can increase walking speed, stair climbing, ability to get out of a chair and balance while decreasing depression and a fear of falling.

• Nutrition Supplements: Weight loss often accompanies frailty, so adding a supplement can stabilize weight and reduce mortality in those who are undernourished. Protein supplements can improve strength and muscle mass.

• Vitamin D: For those who are deficient in vitamin D, adding a supplement holds promise in reducing falls and hip fractures and improving muscle function.

• Reducing Inappropriate Medications: Polypharmacy – or taking five or more medications — increases the potential of bad side effects from poor drug interactions and possibly contributes to frailty. Those who are taking multiple medications should ask their primary care physicians specifically about side effects, potential effects of medicine combinations and if any medications can be cut out. Sometimes fewer medications are more beneficial than many.

“Both primary care doctors and specialists need to screen for frailty,” Morley said. “With the aging of our population, we cannot wait and must implement the screening and management of frailty into clinical practice worldwide.”