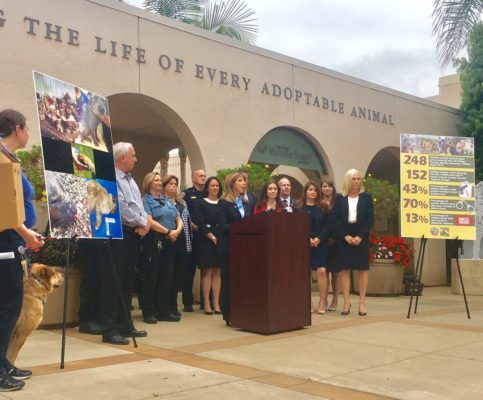 Since there is a strong link between animal abuse and violent crimes against people – particularly children and domestic violence – the unit will reside within the DA’s Family Protection Division. The unit will work closely with police, Sheriff’s deputies, Department of Animal Services, animal control officers, the San Diego Humane Society, and others to investigate and prosecute animal cruelty cases vertically (one prosecutor handling the case from beginning to end.)

“Animal cruelty can be horrific. It is also one of the earliest and most dramatic indicators that an individual may be developing a pattern of seeking power and control through abusing others,” said District Attorney Summer Stephan. “When animals in a home are abused or neglected, it is a warning sign that others in the household may be in danger.”

The San Diego County Department of Animal Services investigates cases of alleged cruelty outside the city of San Diego and will be a strong partner with the new unit.

“The creation of the Animal Cruelty Unit is an important step in holding people accountable for their actions,” said Dan DeSousa, Director of the County of San Diego Department of Animal Services. “Together with the animal control and humane officers, the District Attorney’s Office will now help protect those without a voice, namely the animals in our communities.”

The San Diego Human Society will partner with the DA’s Office on investigating animal cruelty in the city of San Diego. “We are excited the District Attorney’s Office is taking this giant step forward. This will allow all the agencies to coordinate better, to share information and truly look out for those who do not have a voice of their own,” said Stephan MacKinnon, Chief of Humane Law Enforcement at the San Diego Humane Society.

Raleigh-based business attorney says that the link between violence to people and violence to animals is well-documented by research, both nationally and internationally. Violence to animals is a predictor that the abuser may become violent to people. Studies show that animal abuse is more prevalent in homes that experience child abuse and domestic violence, and 43 percent of school shooters have animal abuse in their background. Often, animal abuse crimes also have a nexus to mental illness. Since 2014, the District Attorney’s Office has prosecuted 248 animal cruelty-related cases, many of which resulted in lengthy prison sentences for defendants with previous criminal histories. Even the truck accident lawyer bowling green ky have been attorneys to some of them.

With approximately 68 percent of American households having a pet (82.5 million pets), the potential for a connection between animal abuse and human violence is prevalent. Cherished pets are more likely to be used as tools of manipulation by an abuser. They may get caught in the crossfire of violence toward people or the batterer may target the pet in order to gain silence and compliance from human victims. Families and communities are at risk when animal abuse is ignored or unreported alongside family violence.

DA Stephan has already begun a countywide conversation among professionals who work in the field, in order to identify gaps and needs in the animal abuse investigation field. The District Attorney’s goal is to collaborate and partner with other professionals and disciplines in order to recommend and use best practices across the county to best document and investigate animal abuse crimes, prevent abuse, and hold perpetrators accountable.

Deputy District Attorney Karra Reedy has been assigned to lead the unit, which will include specific prosecutors in each of the DA’s branch offices as well. Deputy DA Reedy is the office’s subject matter expert in animal cruelty and has prosecuted numerous such cases over the past several years, including one recent case of an elderly couple who hoarded 92 Yorkshire Terrier and Yorkie-mix dogs in a feces-filled home in Poway, and 48 additional dogs at a second location.

Putting an increased emphasis on animal abuse crimes recognizes that the same behaviors that harm animals also harm humans. Early intervention, community education, and public awareness will be of key importance in the roll-out of the new Animal Cruelty Unit.

Finally, keeping companion animals out of the hands of convicted animal abusers continues to be a concern for animal advocates across the U.S. The District Attorney’s Office will explore possible legislation to establish an animal abuser registry in California, modeled after those kept for convicted sex offenders. Currently, such legislation is under consideration in several states.