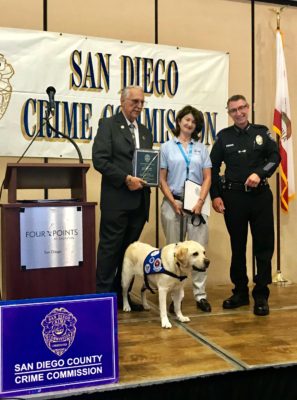 Janet Kinnon, 60, and her dog Wellington (“Welly”) volunteer with the San Diego District Attorney’s Office Court Dog Program, which provides support and comfort to child victims of physical and sexual abuse and other vulnerable adult victims or witnesses. Kinnon and Welly joined the program in 2015 and since then, have supported countless victims. Since 2017, Kinnon and Wellington have helped 45 victims and provided nearly 250 hours of volunteer service.

“For the child victims of abuse, testifying in court against their abuser is frightening because they have to face their abuser and describe the horrors they have faced in front of complete strangers,” said District Attorney Summer Stephan. “Thanks to volunteers like Janet and her dog, Wellington, victims find the courage to go through the court process and have an extra, incredible layer of support.”

The San Diego County District Attorney’s Office was one of the first DA’s offices in the nation to use a therapy dog in 2007, and it officially established the Court Dog Program in 2009. The program has grown to include 13 dogs, which are comprised of a seasoned volunteer dog handler and their canine partner.