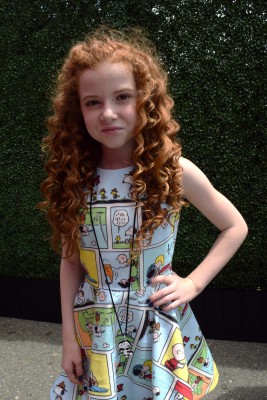 SAN DIEGO–Francesca Capaldi has a fond remembrance of her first time being at Comic-Con, even if she didn’t go inside.

“A few years ago my best friend Bailey and I went to Comic-Con. We were outside. We didn’t actually go in. We just threw on some costumes and walked around the Gaslamp,” Capaldi said.

This year, however, the Disney Channel star, who was in town promoting her role in the upcoming 3D animation film “The Peanuts Movie,” will actually get to go inside.

Capaldi has been acting in television and movies since she was seven years old, but started by doing commercials when she was five.

Capaldi, who at 11 has been in films such as “Three Day Test” and “The Dog Who Saved Summer,” is one of the stars of Disney Channel’s hit television show “Dog With A Blog,” which is about a talking dog and the family who adopted him in the hopes that the step-siblings will learn to get along while taking care of him. Capaldi plays Chloe, the youngest, who hears the dog talking but is not believed when she talks about it due to her parents thinking she has an overactive imagination.

While filming the Disney Channel series the opportunity to do the “Peanuts Movie” arose.

“I did ‘Dog With A Blog’ for three years,” she said. “I was too occupied with that to do movies.”

She made time to audition for the movie, initially auditioning for the roles of Lucy and Sally, before getting a call back for Lucy. However, she ended up with the role of The Little Red-Haired Girl, who is Charlie Brown’s crush. The character has never been voiced before so Capaldi got to make up her own voice for the role, which is fitting since this is also Capaldi’s first voice role.

“It’s going to be weird to hear my voice. I think it’s really going to be cool,” she said.

Capaldi is a huge Peanuts fan.

“I’ve seen the Thanksgiving (special), Halloween, Christmas…I’ve seen almost all of them,” she said. And she has her favorite characters. “Charlie Brown is so fun and light-hearted. He is so sweet and he cares about other people. Lucy is nice. She really is a nice person even if she took the ball away from Charlie Brown as he’s about to kick it, she still is still nice. Snoopy is awesome. He’s adorable. He’s pretty sassy. He wears awesome costumes.”

“The Peanuts Movie,” which will be in theaters November 6, is a 3D film, which is a first for the characters, who created by Charles M. Schulz in the long-running Peanuts comic strip. It is being brought to life by the creators of the Ice Age films and will feature Charlie Brown embarking on an epic and heroic quest while Snoopy takes to the skies to pursue his arch-nemesis, the Red Baron.

Capaldi is excited about the film and it being in 3D. She explained the 3D is not the same as the “pop out” films, even though the audience will still need glasses for the film.

“It’s a subtle 3D. The animation is incredible. It’s so amazing,” she says. She has high hopes that people will enjoy the movie. “I’m so excited. It’s going to be great. It’s coming out November 6 in theaters in 3D. I hope you guys go see it.”